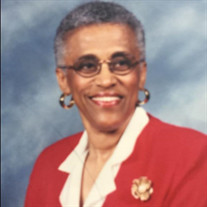 Obituary Zenobia Jean was born on June 15, 1932 in Okmulgee, Oklahoma to the late Devent and Charlie Ola Davis. She was the third of four children. She attended Attucks and Banneker Elementary and Dunbar High School. After high school Zenobia matriculated to Tennessee State University (formerly Tennessee A&I State College) in Nashville and graduated with a degree in Elementary Education. She pledged Alpha Kappa Alpha sorority while attending. Her younger sister Peggy was inspired to also attend and graduate from Tennessee State. Zenobia, often affectionately called Zee, married Woodley Taylor in 1956 and from this union came Diane and Steven. They settled in Montclair, NJ and she began her teaching career in the local school system, beginning as a 3rd grade teacher at Glenfield Elementary School who developed a special rapport with her students based on her high expectations. After 12 years, she decided to combine her love of teaching with her love of music and went back to school and obtained an MA in Music Education. She then became a music teacher, with a flair for arranging school wide music concerts showcasing the talents of her students. She was an active member of Union Baptist Church, lending her musical gifts by directing the Youth Choir, singing alto in the Senior Choir, as well as participating in many other aspects of the Church. After 31 years in the school system, Zee retired and moved to Maryland to be closer to family. She soon found a church home at First Baptist Church of Highland Park, and enjoyed singing in the choir, and other church ministries. She led an active lifestyle in retirement and cherished her frequent travel time with family and friends to fun-filled events, and international destinations. She especially found joy in watching her three grandsons play AAU, high school and college basketball. Zenobia was called to her heavenly home on March 1, 2022. She was preceded in death by her former husband, Woodley Taylor; and her siblings, Juanita McDaniels, Collis Davis, and Peggy Jones. She leaves to cherish her memory her two children, Diane Wright (Orlando), and Steven Taylor (Melba); three grandsons, OJ Wright (Judith), Christopher Wright (Erin), and Bakari Taylor; five great-grands, Christopher Wright Jr, Kennedy Wright, Charlotte Wright, Orlando Wright Jr, and Camilla Wright; three nieces, Gail Davis, Janice Davis, and Terri Jones; two nephews, Bruce Davis and Darryl Jones; one great niece, Darsha Davis, and a host of friends, former students and extended family.

Obituary Zenobia Jean was born on June 15, 1932 in Okmulgee, Oklahoma to the late Devent and Charlie Ola Davis. She was the third of four children. She attended Attucks and Banneker Elementary and Dunbar... View Obituary & Service Information

Send flowers to the Taylor family.