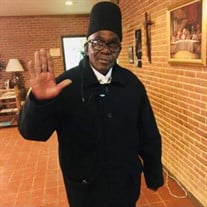 Brother Willie DeCoster-EL, Jr fulfilled his earthly tasks and was called home to rest on Monday August 9, 2021. Junior (as he was affectionately known) was 69 years young, born on November 9, 1951 in Kingstree, South Carolina to the late Elder Willie DeCoster Sr. and Gussie Roberta Kennedy DeCoster. He received his higher education in Washington, DC, completed coursework at the University of the District of Columbia, along with earning a Realtors License; and was an Ordained Divine Minister in the Moorish Science Temple of America (MST of A), Inc. Junior was an avid entrepreneur and business owner who owned/managed several independent businesses. In 1982, Junior proclaimed his Nationality as a Moorish-American in the MST of A receiving the Tribal name of El to signify his Moorish Heritage. The MST of A is a lawfully chartered organization founded in 1913 by Our Prophet Noble Drew Ali. The Organization teaches us to learn to love instead of to hate. Brother W. DeCoster-El, Jr. served as a Chairman for Temple No. 71 for many years and in Temple No. 77 he served in the Chairman position and as Secretary for many years. Both Temples are located in Washington, D.C. He also was a Mufti in the MST of A Organization serving as Major of the Eastern Region of the United States. He embraced and had Faith in the teachings of Prophet and Founder of the MST of A, Noble Drew Ali which emphasizes Love, Truth, Peace, Freedom and Justice. Every Friday (Holy Day) and Sunday (Sunday School Classes) Brother DeCoster-EL, Jr. would dedicate himself to the Moorish Science Temple of America. Whether in person or on a Zoom call, he was in attendance. Junior was a family man. Although, he did not celebrate outside of the Moorish-American Holidays, Thanksgiving was his favorite time of the year. Every year, he would mention how he was so happy to go over his siblings’ homes, sister Peggie or brother James to fellowship with his family which was a tradition that started in November 1988! Along with the family tradition, he made a commitment to his children. He would drive across town at least 4 days a week just to spend time with his children/grandchildren. He enjoyed the outdoors so he would go to the park as much as he could or go to his oldest son, Rashid’s backyard, grab his chair and just sit back enjoying the weather. Junior was a wise strategic thinker who always placed serving others first. He believed in giving back to the ones in need so he would volunteer by doing fundraisers and clothes/food drives with many institutions including Bread For The City, University of the District of Columbia, S.O.M.E, Moorish Science Temple of America and plenty more! Willie DeCoster-El, Jr. had a heart of gold and will forever be missed. Those that remain to cherish his loving memory, wisdom and celebrate his life are his lifelong partner, Charlotte Peoples, his sons Rashid, Rashad (deceased), Rakeem Peoples, daughters Latarsha Green, Rasikhah, and Rashida Peoples. Also, he cherished his 10 grandchildren Takiya, Tyrik, Taniya, Xavier, Tyquan, Ariana, Xavion, Sydni, Sevyn, and Ahmir. He leaves his siblings, (brothers) Adam (Elaine-deceased) Kennedy of York, PA, John DeCoster of Norristown, PA, Pastor James (Dr. Tijuanna) DeCoster of Glenn Dale, MD, Frederick DeCoster of Rome, GA, Michael (Sandrel) DeCoster of Norristown, PA, and Marlon DeCoster of San Diego, CA, (sisters) Freda DeCoster of Columbia, SC, Peggie (Minister Leonard) Shuler of Suitland MD, Eunice (Elder Bernard) Giles of Florence, SC, Jean DeCoster of Portland, OR, Celestine (Thomas) Chandler of Deerfield Beach, FL and Dr. Gwendolyn (Elder Tony) Alexander of Memphis, TN, and a host of nieces, nephews, other relatives, close friends, and family, from the Moorish Science Temple of America nationwide. Willie DeCoster-EL Jr, generosity and good heart will be greatly missed by all those whose lives he touched. "In lieu of flowers the family requests memorial contributions be made to: So Others Might Eat (SOME) 71 O St. NW Washington, DC 20001 202-797-8806

Brother Willie DeCoster-EL, Jr fulfilled his earthly tasks and was called home to rest on Monday August 9, 2021. Junior (as he was affectionately known) was 69 years young, born on November 9, 1951 in Kingstree, South Carolina to the late Elder... View Obituary & Service Information

The family of Willie DeCoster-EL, Jr. created this Life Tributes page to make it easy to share your memories.