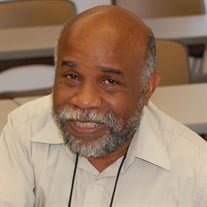 William Green Hoover She called him Guillermo. They called him William. Most folk called him Hoover. And only one could call him Dad. No matter what name you knew him by, he was always ready to answer with a warm smile and willing hands in whatever way he could. He was a man of service and peace. Often a quiet observer, William truly enjoyed trying to make the world a little bit brighter everyday. On March 1, 2022, he completed his life’s circle in Burtonsville, Maryland. William was a Washington D.C. native, born to Joseph and Mary Hoover on July 26, 1952. As a bass drummer in the Eastern Senior High School band in NE Washington D.C., he found his rhythm and learned to march to the beat of his own drum, graduating in 1970. He loved all things flight, so he joined the US Air Force and attended the USAF Academy after high school. He worked as an IT Specialist for Dow Jones, Inc. for over 20 years, and he used his talent for logic and numbers to tutor young people. He was a member of the Emmanuel-Brinklow Seventh Day Adventist Church where he served as a deacon, an audio/visual team member and a mentor with the young men’s group, Young Warriors. Some of the things that really brought out the zest of life for William included camping, photography, traveling and automobiles. He dreamt of one day getting his pilot’s license so he could enjoy his retirement in the clouds. He also loved to give. With Global Vessels, William traveled to Tanzania and Ghana to help build a school, library and orphanage. With Prepare Our Youth, he offered help with computers, tutoring and more. He was always willing to buy a meal for a stranger in need or offer a kind word. He saw the world differently. He saw it as a place he could change for the better just by being himself. He walked the circle of his life with love and compassion for others. His laughter, friendship and gentle spirit will be missed by all who had the pleasure of journeying with him during his time in this world. He was preceded in death by his father, Joseph Hoover Sr., and he leaves to tell his story, his mother, Mary Hoover, his wife, Paula Hoover, daughter, Miriam Hoover (Stanley), sisters, Alicia Curley (Earl) and Regina Hoover, brother, Joseph Hoover Jr. (Anna), four grandchildren, Aamira, Riel, Paru and Khonsu, and many aunts, uncles, nieces, nephews, cousins, friends and loved ones. The Hoover family asks that you consider donating to one of his favorite charities in his honor in lieu of flowers.

William Green Hoover She called him Guillermo. They called him William. Most folk called him Hoover. And only one could call him Dad. No matter what name you knew him by, he was always ready to answer with a warm smile and willing hands in whatever... View Obituary & Service Information

The family of William Green Hoover created this Life Tributes page to make it easy to share your memories.

William Green Hoover
She called him Guillermo. They called him...

Send flowers to the Hoover family.