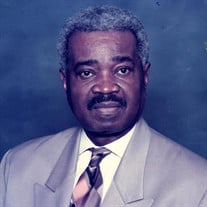 Zoom Platform for Funeral Services for Mr. William D. Fields, Sr. https://drive.google.com/file/d/1dCi_60Z246-l_e494fdI3JBhJ4AYXehk/view?usp=sharing To Join by Computer or Smartphone App: https://us02web.zoom.us/j/82403902148?pwd=R2VtRIUrUCtwUjd5LzBzQVpxU0ZCdz0 Meeting ID:824 0390 2148 Password: 3101 To Join by telephone (listen only): (301) 715-8592 Meeting ID:824 0390 2148# Password: 3101# His Life Lived and Celebrated William Delanzo Fields, Sr., a dedicated servant of God, was called to glory on Friday, August 13, 2021, at the Calvert Health Medical Center, Prince Frederick, Maryland. Raised in Clinton, North Carolina, he was the first of five children born to the late Edmond Jeremiah and Frances Everett Fields, on May 24, 1941. His brother, Edmond Jeremiah Fields, Jr., preceded him in eternal life. Two sisters (Mary Frances and Maxine) preceded him in eternal life as infants. His youngest sibling, Lithia Carol Fields, lives in his hometown of Clinton. He was a member of Lisbon Street Baptist Church in Clinton and received Jesus Christ as his Lord and Savior at an early age; and as a little boy, he, his father and younger brother would be called upon to perform in different churches as the “Fields’ Trio”. This early start of singing would be the impetus for his participation in choirs, singing groups and solo performances. As a student at Sampson High School, he honed his voice as the tenor in the Sampson High School Quartet, affectionately known as the “Harmonizing Four”. He was also an athlete who played guard on Sampson High School’s varsity basketball team. He graduated from Sampson High School in Clinton where he established many lifetime, loving friends who call him “WD”. ‘WD’ continued his education at Howard University and became affectionately known as “Billy” in the Washington D.C. area. He studied Chemical Engineering, Business Administration, Music, traveled with the Howard University Concert Choir to South and Central America, and generated lasting friendships with his charismatic personality and warm smile. One of those friendships blossomed into a lasting marriage of over 60 years to Loreathea A. Crutchfield of Newport News, VA. This union blessed them with a son, William, Jr. who became an ordained minister. He was proud of his son, and felt extremely blessed by God. Billy worked for over 51 years with the United States Postal Service, beginning his career in 1962. Throughout his career he worked several assignments, the latter being the Quality Control Specialist. As the Quality Control Specialist, he was responsible for working with mail operations and providing dialogue with top Management officials. Billy was always focused on the good of the postal service and its overall service to the customer. His unwavering knowledge of all operations assisted in the day-to-day success of mail operations as well as training new employees and assisting newly promoted Managers/Supervisors. Many of his co-workers affectionally called him Billy D. With an effervescent smile and a warmly engaging spirit, he treated friends, co-workers and customers like family. Billy retired in 2013. During his career, he received multiple awards for superior accomplishments. Billy joined the Brookland Union Baptist Church in March 1965 and immediately shared his gifts of leadership by serving in various capacities, such as, President of the Senior Choir and President of the May Birthday Club. He became an ordained Deacon of the church on December 9, 1990 and was honored to be elected to serve as the Chairman of the Deacon Ministry for over 20 years. During his service at Brookland Union Baptist Church and in the Brookland Community, he took a Christ-like approach as he provided guidance and wisdom to those who sought his counsel. Billy was gifted with a golden tenor voice and conducted concerts at Brookland Union and surrounding churches throughout the Washington Metropolitan Area. His voice captivated everyone who heard him sing to the extent he was offered a recording contract when he was a young man living in Washington. He obtained national exposure when he performed the National Anthem for “The Washington Football Team” (formerly known as “The Washington Redskins”) and “The Washington Wizards”. He also traveled to his hometown of Clinton, North Carolina to give a concert at his baptismal church, Lisbon Street Baptist Church. He was a member of the Most Worshipful Prince Hall Grand Lodge where he served as the Grand Trustee within the Cabinet of the Most Worshipful Grand Master for several years, was elected Worshipful Master of Prudence Lodge 27 in 1969 and received awards of recognition for outstanding services of time and effort to Prudence Lodge 27. Billy loved and served his Church, participated in many organizations, had a long career, and looked forward to reuniting with his old high school and longtime friends when he could. However, his participation in the church, community, and other activities diminished because of his long-term illness. Billy leaves to cherish his memory a loving wife, Loreathea A. Crutchfield Fields; a devoted son, Rev. William Delanzo Fields, Jr.; a daughter-in-law, Shirli Pitt-Fields; two grandchildren (Summer-Joy Channelle Fields and William Delanzo Fields, III); a sister, Lithia Carol Fields; two sisters-in-law (Betty Coles Fields and Silvia Crutchfield Daniels); one brother-in-law, Rucker Caesar Crutchfield, III; four nieces (LaRhonda Nicholas [Carl Nicholas, spouse]; Kimberly Fields Smith [Aziz Smith, spouse]; Cicily Daniels-Marcias [Brett Marcias, spouse] and Dana Daniels); two nephews (Jeremy Fields and Rucker C. Johnson [Candice Johnson, spouse]); first cousins, Truman and Bernie Williams; and extended family, Warner T. Brown, III. He also leaves several great nieces, great nephews, cousins, friends, and acquaintances. Memories are the legacy of love… til we meet again! https://www.dropbox.com/home?preview=FINAL_WilliamFields+Sr_09012021.mp4

The family of William D. Fields, Sr. created this Life Tributes page to make it easy to share your memories.