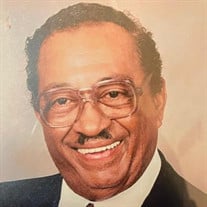 Walter Eugene Vaughn (age: 92), died peacefully on December 15, 2021, in his home in Washington, D.C. He is survived by his wife of 54 years, Anne; children: Karl (deceased), Deborah, Cheryl and Derrick also grandson Christopher (granddaughter Skylar), daughter-in- law Jackie Vaughn, step-grand daughter LaShawn(Aaron), step-grandsons Brandon and Darren. Sisters, Marzetta Baldwin, Lela Dicks and Flarilla Harris, special cousin Edwin Bethea, godson Ronald Payne, sister-in-law Beatrice Stokes (Bill) and many close nieces, nephews cousins and friends. Walter was born in Wilcox County in Camden, Alabama. He was raised by his mother and his uncle Johnnie. He also had a loving stepmother Yvonne Vaughn. He worked on a farm and was an overseer on a plantation. He graduated from Parker High School in Birmingham, Alabama in 1948. He also attended Wilcox County Training School and Knoxville College in Knoxville, Tennessee. He attended college under the G.I Bill and Biology was his major. He served in the U.S. Army and the U.S. Air Force. He and his wife Dosia Mae Harris Vaughn married in 1958 and lived in New Jersey. Dosia died in 1966 and Walter later moved to Washington, D.C and later met and married Anne Stokes. While living with relatives in Birmingham, he worked at a hotel to support himself through high school. He lived for a short time with his father Eugene Vaughn in New Orleans, Louisiana. He entered the United States Military and served four(4) years in the Army and six(6) years in the U.S. Air Force. He was employed as a carpenter at the U.S. Post Office. He was a long time member of the Fifteenth Street Presbyterian Church in Washington, D.C., where he served in the choir, as an Elder and, on the Men’s Council. He had a career with the U.S. Postal Service for 44 years and earned many special awards before retiring.

The family of Walter E. Vaughn created this Life Tributes page to make it easy to share your memories.

Send flowers to the Vaughn family.