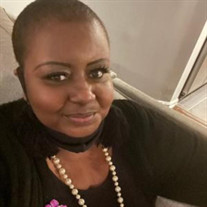 Tina Fraynee Smith was born in Washington, D.C. on Saturday, November 20, 1971 to the parents of Robert and Lillie Pearson. She transitioned to her heavenly home on Tuesday, January 4, 2022 with her husband, Derrick, mother-n-law, Lillian, and longtime friend, Shamonda, by her side after a 5-year battle with colon cancer. Tina fought a good fight and never lost faith. She is now free from all pain and suffering and is at peace with the Lord. During her childhood, Tina was a member of Trinity AME Zion Church in Washington, D.C. where she dedicated her life to Christ. She participated in Sunday school, the Children’s Usher Board, Children’s Choir and Buds of Promise. During her adult years, she attended various churches throughout the DMV area. Her faith in the LORD was her source of strength, love and happiness. Tina received her formal education in the District of Columbia Public School system. In the 8th grade, she won a talent contest where she wrote a rap entitled, “Staying in School” and she could recite that rap anytime or anywhere you asked her. The rap was really good and is still relevant today. Tina graduated from Bertie Backus Junior High School as the Salutatorian of the class of 1986 and went on to Woodrow Wilson Senior High School (Go Wilson Tigers!) where she was a member of the Gifted and Talented Program. She graduated from Wilson in 1989 and was honored at a D.C. Public School Program for 13 years (kindergarten-12th grade) of perfect attendance. She was interviewed by the Washington Post for her outstanding accomplishment and when asked, “Why did you go to school every day?” Tina said, "My parents got up and went to work every day, so I got up and went to school." Tina was such an overachiever! Tina’s passion to attend a Historically Black College led her to Bennett College in Greensboro, North Carolina, one of only two all-women’s black institutions. During her tenure at Bennett, she was inducted into the Delta Sigma Theta Sorority (Line #12, Line Name – B-Never-Lent). Bennett College is where she built a strong sisterhood with so many phenomenal women that she loved, admired, encouraged, prayed with and kept in contact with throughout the years. Tina graduated from Bennett College with a BA degree in Business Administration in 1993. After college, instead of jumping into the workforce, Tina took time off to help care for Momma Joan Early (best friend’s Mom) who was battling cancer. Tina didn’t let anything or anyone stop her from caring for Momma Joan in her time of need and was there with Momma Joan until the Lord called her home. That’s just the type of person that Tina was, kind-hearted, loving, caring, devoted and selfless; always putting others’ needs before her own. Career wise, Tina exceled in various positions in the credit union industry since 1994 and was currently serving as the Vice President of Support Services for the United States Senate Federal Credit Union which was a dream job for her. Tina spoke highly of her manager, Ms. Kathy Dalfrey (also known as Momma Bear), who played an integral role in Tina’s successful career. Tina’s strong work ethic, kindred spirit, and empowerment to help others were many traits that so many loved about her. On November 11, 2011, Tina married Derrick Smith, Sr. in Las Vegas, Nevada. The fun loving couple had so much in common, including their passion for all things D.C. - Washington Football Team, Washington Wizards, and GO-GO music which brought so much fun and excitement to their lives. They loved to travel, spend time with family and friends, play board games, chill out on the patio or just curl up in front of the TV and watch a good movie. Tina loved Derrick very much and called him “Honey Bunny” for his unconditional love, love of family, and his crazy sense of humor. They were truly the perfect match. Although they didn’t birth any children together, Tina was considered to be a “Bonus Mom” to Derrick’s four children and they referred to her as “Ma.” Derrick would say, “Tina was the best thing to ever happen to me and the kids loved her just as much if not more than me.” Tina leaves to cherish her memory: Husband of 10 years: Derrick Smith, Sr., Parents: Robert and Lillie Pearson, Sister: Terry Jenkins (Ronald), Niece: Tiera Johnson-Pearson, Bonus Mom to: LaShon, Kayla, Javon, Deuce, Father-n-Law: Curtis Smith, Jr. Mother-n-Law, Lillian Smith, Godchildren, hosts of uncles, aunts, cousins and friends.

Tina Fraynee Smith was born in Washington, D.C. on Saturday, November 20, 1971 to the parents of Robert and Lillie Pearson. She transitioned to her heavenly home on Tuesday, January 4, 2022 with her husband, Derrick, mother-n-law, Lillian,... View Obituary & Service Information

The family of Tina F. Smith created this Life Tributes page to make it easy to share your memories.

Tina Fraynee Smith was born in Washington, D.C. on Saturday,...