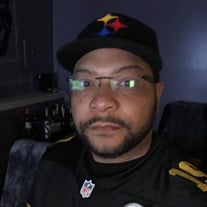 Timmie Miller-McCloud had a personal greeting and positive word for everyone he met. He was an extrovert and the epitome of a gentleman. He was always willing to help with a generous heart often offering his last to anyone. Timmie was a family man and loved to be surrounded by family. He immensely valued his social justice teachings and legacy; never forgetting his personal life story, he always found a way to give-back and serve others. The youngest of a set of twins, Timmie and Kemmie were born on July 15, 1989. On December 13, 1996 Timmie’s twin brother Kemmie and his foster father, Robert Hoderny were tragically stuck by a car. Angels carried Kemmie and Robert to heaven and left behind a world of grieving hearts. Timmie, Kemmie and Robert were loved intensely by their St. Francis De Sales School Family, Archbishop Carroll High School Family and the Archdiocese of Washington Catholic Community. Timmie was born in the heart of Vivian McCloud, where she showered him with love, support and encouragement. He was her “baby boy”. She held her son tightly in her arms and heart. The bond between him and his mother was unbreakable. She was always there to guide him as he navigated life. They shared a love of oldie’s music, discussing current events and politics and enjoying the outdoors. He will be forever be connected to his big sister London, she affectionately called him “Buddha”. Their strong sibling bond included “inside” family jokes, becoming coffee aficionados and their obsession with “Tiger King” series. After attending St Francis De Sales, he attended Washington Jesuit Academy, where he graduated as Valedictorian. He earned a full scholarship to Georgetown Preparatory High School, where he lived on campus. He did well academically and was the Captain of the Rugby Team and study abroad in Argentina. Upon graduation from Prep, he earned a scholarship to and attended Loyola University in Baltimore, MD. He is now reunited with his soulmate Kemmie and Robert. He was preceded in death by his spouse, Theresa. He is survived by his loving mother, Vivian McCloud; sister, London McCloud. He was proud provider and caretaker to his son, Robert. Also survived by Kortni and Jamau; his godparents Mike Miller (Rochester, NY) and Katie Murphy (Washington, DC). His aunt’s Brenda (Durham, NC), Phyllis (Boston, MA), Janice (Durham, NC) and Uncle Issac (Lorraine) (Fredericksburg, VA). He will be dearly missed by his confidant, travel buddy and grill master partner, Joseph “Cuz” Brown. Special cousins Tia Black (Martin) and Brittany Brown (Durham, NC). He forged lasting friendships from childhood with Nick Wilson, Brandon Tisdale, and DJ Smith. He will be sincerely missed by his extended family, friends and all that knew him. LIVE ONLINE VIEWING : http://live.1015multimedia.com

Timmie Miller-McCloud had a personal greeting and positive word for everyone he met. He was an extrovert and the epitome of a gentleman. He was always willing to help with a generous heart often offering his last to anyone. Timmie was a family... View Obituary & Service Information

The family of Timmie Tavon Miller-McCloud created this Life Tributes page to make it easy to share your memories.

Timmie Miller-McCloud had a personal greeting and positive word...

Send flowers to the Miller-McCloud family.