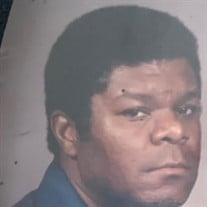 Thomas M. Powell On Wednesday, April 29, 2021, the soul of Thomas Marcus Powell (affectionately known as Tom) took flight to the home that God prepared for him. Death opened the "Door to the Kingdom of God and Life Evermore" Thomas Marcus Powell was born on August 13, 1946, in Washington, DC to the late Henry T. Powell, Sr. and Alice Johnson Powell. He graduated from John J. Wright Consolidated School in 1964. He graduated at an early age from High School and contributed to his community by driving the school bus for his school. He honorably served his country as a member of the United States Army and received an honorable discharge in 1972. Thomas left the service on May 19, 1972. He attended Federal City College, Washington DC where he perused a new career, he worked for The Deputy Chief of Staff Army G-1. He was there for the coming and going of many Generals, and other military personnel. He was a 911 survivor. After many years of commendable service, he retired January 31, 2011, after 43 years and 7 months in the same office. Thomas will forever be remembered for his love of football, he faithfully cheered for his "Skins no matter what the score or the season stats. He would proudly wear his "burgundy and gold" to show his dedication to his team. To those, he leaves behind his devoted wife of nearly 44 years, Janice Sharon Powell and children, Lesley Felicia Powell of Temple, MD, and Marcus Raymond Powell and Nickia Jackson of Hyattsville, MD. He is also survived by siblings, Henry (Louise) Powell, Jr. and Joyce Coleman both of Spotsylvania, VA, nine grandchildren, Destiny Powers, Liam Johnson, Jeanice Powell, Janine Powell, Marcus Powell, Jr., Mason Thomas Powell, Destiny Jackson, Semarah Jackson, Dez’ray Jackson, and a host of nieces, nephews, and cousins. In addition to his parents, he was preceded in death by Westley L Henderson, Gevena H Henderson. In law Alice Johnson Powell, Henry T Powell, Sidney L. Coleman, Sr.

Thomas M. Powell On Wednesday, April 29, 2021, the soul of Thomas Marcus Powell (affectionately known as Tom) took flight to the home that God prepared for him. Death opened the "Door to the Kingdom of God and Life Evermore" Thomas Marcus... View Obituary & Service Information

The family of Thomas Marcus Powell created this Life Tributes page to make it easy to share your memories.

Send flowers to the Powell family.