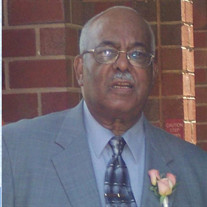 On June 5, 1921, Thomas Edward Hawkins, Sr. affectionately known as “Brother”, was born to William W. Hawkins and Louisa Holland in Washington, D.C. Thomas was the third born child of three, including sisters Marie Simms and Jeanette Hawkins. He was raised in Southeast D.C., educated through the D.C. Public School system, and graduated from Armstrong Technical High School. More importantly, his upbringing included the guidance of a strong family network, including aunts, uncles and neighborhood elders. He was blessed in marriage to the late Willie Mae Mack and blessed once again with six children; Barbara, Yvonne, Thomas (Sonny), Delores, Paulette and Wendell. Thomas was inducted to the United States Navy in January 1945, serving as Steward’s Mate 2/c, stationed in Pensacola, Florida. This gave him a unique and historical experience as a Black serviceman in the mid-century. He would begin a career with the U.S. government as a Chauffeur for the Secretary of Defense, Pentagon officials, Senators, and Congressmen, receiving multiple Letters of Commendation, before retiring in 1980. He also drove a cab with the Capitol and Imperial Cab companies during this time and in retirement. In March of 1952, he was certified as a Master Mason of the third degree of the Omega Lodge No.3. creating even more lasting relationships that spanned decades. Thomas Hawkins, the father, was full of love, fun, discipline, and spirituality. Every Sunday, he would turn off the meter in his cab and pile all six children in to attend church or Sunday school. Summers with the family were always eventful, spending fun-filled days at Atlantic City, Wildwood, Hershey Park, and every museum on The Mall. Time to himself developed hobbies that included building and repairing old-style televisions and working with all types of electrical systems. He was a member of John Stewart Memorial Methodist Church which merged to become Lincoln Park United Methodist Church. As a member of the United Methodist Men, he served in several roles including Treasurer and singing many solos with the Men’s Choir. Thomas, “Brother”, “Hawk” are names that many can claim. But the original, was a man with a tremendous heart, a kind loving spirit, and positive energy that touched everyone. He was a diehard Washington Redskins fan, an immaculate dresser, and always clean as the board of health. Many can attribute their athletic abilities, their Bid whist and Pinochle skills, as well as what it meant to be a great father, husband, brother, man, grandfather, and human being to Thomas Hawkins Sr. In 2011, he relocated to Randolph Village Senior Community in Silver Spring, MD. where he met Ms. Hattie Ziegler. Thomas often referred to Ms. Hattie as his angel, as she cared for him in countless ways and at every hour, even until the last. He also served under Rev. Lyles (ELM) as a "Soloist " from 2013-2018. On April 12th, 2021, at his residence, his spirit departed the physical when The Lord called him home to rest. He was predeceased by wife Willie Mae Hawkins; sisters Marie Simms and Jeanette Hawkins; children Yvonne H. Broussard, Delores Watkins, Paulette H. Carmon, Wendell E. Hawkins, and grandchildren Derek Elzey, Anita Michelle Boardley and Dana Diaz. He leaves in remembrance daughter Barbara H. Elzey, son Thomas E. Hawkins, Jr. and “special” son Isaac (Butch) Jackson. He is additionally survived by 13 grandchildren, 19 great grandchildren, 7 great-great grandchildren, nieces, nephews, a host of many friends and acquaintances.

The family of Thomas E. Hawkins, Sr. created this Life Tributes page to make it easy to share your memories.