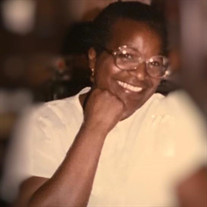 Swanora Vergie B. Williams Vergie—smart, sweet natured, strong-willed, and independent from the start—was born February 16, 1944 in Florence, South Carolina. The only daughter of five, she was called “Bae” by her family. Vergie was first in her class throughout the years, excelling in academics and school plays with her exceptional intellect and memory, graduating from high school as class valedictorian. During the summer, she worked as a mother’s helper in New York, developing a fondness for life in a big city. With interests in studying French and social work, Vergie attended Howard University, like three of her brothers, in Washington, DC in 1962. There she met and married Eli T. Williams, Jr. They had a daughter Sheila Lynne. Supporting her family, Vergie worked for over 16 years as an information operator with Chesapeake & Potomac Telephone Company in downtown DC. After living more than 50 years in the Washington, DC-Maryland area, Vergie lived for five years in Raleigh, NC where she was known as “the walker” in her independent living community. She loved shopping, taking long walks, dining out, and spending time with her family. Vergie also enjoyed the fellowship at Church on the Rock-Raleigh, pastored by Rev. Peter Rochelle. Vergie is preceded in death by her parents Rev. Abraham L. Brockington and Evangelist Blondell Burroughs Brockington and brother Lorenzo Brockington. Vergie is survived by Daughter: Sheila Phinazee and Son-in-love Fredrick Phinazee of Wake Forest, NC; Brothers: Solomon Brockington (Virginia) of Springfield, VA, Abraham Brockington, Jr. (Celeste) of Temple Hills, MD, Deacon Calvin C. Brockington (Rev. Jean Brockington) of Mitchellville, MD; many loving nieces, nephews, other relatives, and friends; Granddaughters: Zoe, Elise, and Jadelyn Phinazee of Wake Forest, NC.

The family of Swanora Vergie Williams created this Life Tributes page to make it easy to share your memories.

Send flowers to the Williams family.