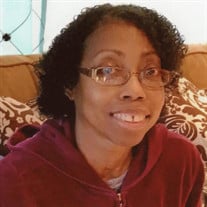 Sema Ramona Gross was born on August 19, 1973 in Washington, DC to the late William L. Gross and Patricia R. Gross. On May 12, 2021, Sema was welcomed into her heavenly home. On the outside looking in, some would describe Sema as quiet, nice, and youthful. For those who knew her life’s story, they would describe her as strong, faithful, resilient, an overcomer, determined, a fighter, divinely blessed, a walking testimony of God’s grace, and simply…a miracle. Sema grew up in Maryland and graduated in 1991 from Crossland High School in Temple Hills, MD. During her freshman year at the University of Maryland, College Park, Sema became ill. After numerous medical exams over several months, she was diagnosed with lupus. In 1994, the lupus attacked Sema’s heart and kidneys. She was airlifted to the hospital and rushed to emergency open heart surgery. Her kidneys shut down and she was placed on dialysis. Family prayed and held vigils day and night as Sema fought for her life and after months in the hospital, God answered their prayers when she was released to go home for Thanksgiving! She continued to live her life and excel mightily in spite of the life-long challenges and setbacks caused by lupus and kidney dialysis three-days a week. Sema returned to school, graduating cum laude with a Bachelor of Arts degree in Library Science from Trinity College in Washington, DC. She worked for Library Systems & Services at the Library of Congress for more than 15 years rising to the rank of Supervisor. She became a homeowner, where she hosted gatherings with family and friends. Sema was a longtime and faithful member of the Church of the Great Commission in Suitland, MD. She enjoyed traveling to family reunions, reading books, playing games, trying out new restaurants, attending the Metropolitan Cooking Shows and going out with family and friends. She was a fan of General Hospital, Greys Anatomy, Judge Judy, and The Office. Sema loved animals and enjoyed visiting the National Zoo, especially during the holidays to see ZooLights. She leaves to cherish her memory, devoted mother, Patricia Gross; loyal sister, Sanovia Gross; brothers and sisters, Michael, Curtis, William Jr, Louis, Catherine, Thama, Rona, Turhan Sr., Toni, Janice, Reginald, Bernadette, Sandra, Allen Sr., Paso, Kiska, Fernando Sr., Serva, Guynel, Gigi, Lynne, Marquette, Nevada, and Anthony; Aunts Mary Spriggs, Gwendolyn Geddie, and Regina Richardson; Cousins Sabreena and Shante; Best Friend, Chanel, and a host of nieces, nephews and friends. She was predeceased by her father, William L. Gross and brothers, Reno, Paceo & Paul Sr. Sema was truly an inspiration for the way she lived her life, staying focused on her goals, being faithful to her Lord and Savior, and never giving up! On Facebook she posted, “One thing they can say about me is that I never gave up!”

Sema Ramona Gross was born on August 19, 1973 in Washington, DC to the late William L. Gross and Patricia R. Gross. On May 12, 2021, Sema was welcomed into her heavenly home. On the outside looking in, some would describe Sema as quiet, nice,... View Obituary & Service Information

The family of Sema Gross created this Life Tributes page to make it easy to share your memories.

Send flowers to the Gross family.