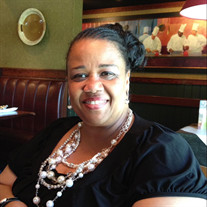 The remarkable Mrs. Drake was a light unto many people. She left an unforgettable impression of love, understanding and kindness to all that she met. She enjoyed mentoring and helping those in need of guidance and her wisdom. All along the way she praised the goodness of God’s grace and mercy for which she knew all things were possible. On September 24, 1959, Saphronia Annette (Scott) Drake was born in Freedman’s Hospital, now Howard University Hospital, to the God-fearing Thomas Scott and the spirited Annabelle Scott. She was the second born of three children and was raised with her siblings Janice (Scott) Ataiyero and Troy Scott (deceased) on 59th Street NW, Washington, DC. As a child growing up, she was not fond of many outdoor activities and had skin allergies to dust and dirt. This led her to take up hobbies that she could do indoors. Of those hobbies she excelled at cooking, baking and sewing to name a few. The word of God was also instilled in her from an early age; she continued to mature in her faith as she developed her walk with God throughout her life. She attended H.D. Woodson High School where, at the age of 16, she met a young fellow in her math class who gained her attention by the name of Paul Drake. They created a bond that led them to become high school sweethearts. On March 10, 1979, they committed their lives to one another with a simple and elegant wedding ceremony. They went on to grow their family. The following year on June 18th, they were blessed with a son Winston Drake. Seven years later on the 18th of April, the couple would have a daughter Jessica (Drake) Edwards. Saphronia always wanted a large family with many children but she physically was not capable due to the health risks she incurred from the past pregnancies. However, she would go on to adopt many “children” that she would mother to in her lifetime. Saphronia was a devoted wife, mother, grandmother, aunt and sister. Family meant the world to her. She instilled the wisdom of life, the power of having faith in God and strength in having unshakable family ties to all her loved ones. Planning family events for birthdays, holidays and other commemorative events was a joy for her. Christmas, her absolute favorite holiday, was always a gathering the family looked forward to. She filled every space of the house inside and out with holiday décor. It did not matter if there was two or twenty, she prepared an amazing spread of food and baked goods all on her own for everyone to enjoy. In her professional journey, she obtained experience in various careers. She worked in fields spanning from federal government agencies such as the Federal Emergency Management Agency (FEMA) to teaching a kindergarten class of four-year-old children at a private Christian academy. She even ventured out to successfully sell Mary Kay cosmetics for supplemental income while she stayed home to care for her young children. While she was talented in many areas, nothing would compare to the work she performed as the Senior Administrative Assistant in the Political Science Department of Howard University. Her career at Howard University began when she took a temporary administrative assistant position in the Political Science Department. She had no inkling that she would make such a good impression on the Department Chair, faculty and staff that they would extend the role to her as a permanent position. She accepted to fulfill the role and the rest is history! In her twenty plus years served in the Political Science Department she became a pinnacle of knowledge and service setting the bar of excellence high for all those she encountered at Howard University. The most notable acts of service she displayed was the continuous helping hand that she extended to her colleagues and to the extensive list of college students who found themselves at her office door. She developed a reputation as being the mother of the Political Science Department. She never turned anyone in need away. If there was someone who could find the solution to the problem, it was Mrs. Drake. Whether it was a need for food, shelter, clothing for an interview or a correction to a class, she got the job done in effortless fashion. She had an enormous heart and spread love wherever she went to all that needed it. Saphronia A. Drake is survived not only by her husband Paul and children Winston and Jessica but also by her grandchildren Donte Drake, Mason Edwards and the soon to arrive Carter Edwards. She left a massive impression on the world. She was an angel to many here on earth and now has been brought home to her heavenly father to rest after an ultimate job well-done. The best way to honor her memory is to give unconditionally the way she gave to us all. She will be greatly missed but through the legacy she has created, her spirit will live on eternally in all of our hearts. Acknowledgments from the Family: We would like to express our deepest appreciation for the many actions of love, concern and kindness shown to us during this time of bereavement. Words cannot express how humbled we are to be surrounded by the enormous circle of support in this difficult time.

The remarkable Mrs. Drake was a light unto many people. She left an unforgettable impression of love, understanding and kindness to all that she met. She enjoyed mentoring and helping those in need of guidance and her wisdom. All along... View Obituary & Service Information

The family of Saphronia A. Drake created this Life Tributes page to make it easy to share your memories.

The remarkable Mrs. Drake was a light unto many people. She left...

Send flowers to the Drake family.