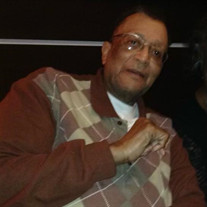 Not sure what to send?

The sunrise of Samuel Hardy life was on May 29, 1938 in Danville, Virginia to the parents, Ruth Hardy and Joseph Hatchett, of Danville, Virginia. Samuel Hardy, age 83, of Temple Hills, Maryland, died peacefully Monday, January 3, 2022, at his residence. (after experiencing an illness.) He received his education in Danville, Virginia where he met his devoted wife at Gibson Elementary School. On July 3, 1956 married Mozelle V. Hardy and to that union a son, Emmanuel Hardy was born. 65 years of marriage – epitomizes strength Samuel Hardy was self-employed as a taxi cab driver with Yellow Cab, Madison Taxi and other taxi cab companies. He ultimately retired from Yellow Cab many years ago. If you knew Samuel Hardy, you knew he was an avid bowler. “Red Toe” was his name. He even painted the toe area of one of his bowling shoes. Samuel bowled in many leagues within the DC Metropolitan Area and traveled out of state for tournaments, including Ohio and New York. He also enjoyed cooking, spending time with family, playing games and eating seafood. Harrington Raceway & Casino and Dover Downs Casino were two favorite places of Sam’s. If he could have went to either of the casinos every weekend, we are more than sure that he would have gone! He leaves to cherish his memories his devoted wife Mozelle V. Hardy four devoted grandchildren, Darron, Shadawn, Emmanuel Jr., Emmanuel, nine great grandchildren – Taryanna, Montego, Khari, Zyeir, Diego, Bryce, Zeveon, Skylar, and Daylin, sisters, aunt – Mae West Deshazo, and a very devoted friend and granddaughter – Curtia Palmer of Bryans Road, Maryland and a very devoted friend and grandson - Christopher Wilson of Flowood, Mississippi. A host of cousins, nieces, nephews, other relatives and friends. Samuel Hardy was predeceased by his son Emmanuel Hardy, his mother, Ruth Hardy, his father, Joseph Hatchett, and his brothers, William Hardy and Carl Hatchett.

The family of Samuel Hardy created this Life Tributes page to make it easy to share your memories.