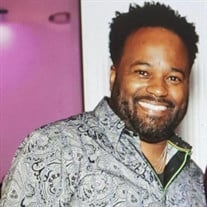 Rynell Lydell Dixon entered eternal life on March 5, 2022. Leaving behind a zest for life, hard work and perseverance. He was born February 6, 1968, in Washington, D.C. to Shilah K. Hanee (Harry Lee Dudley Jr. - Bucky) and Ann Theresa Dixon, who both preceded him in death. Rynell attended D.C. Public Schools, graduating from Frank W. Ballou High School with a full academic scholarship to Florida A & M University. He received his BS degree in Business Administration with cum laude honors. During these years he also met and married Cassandra Hiett with whom he had his only child, Rahsean. Even though the marriage did not last, their love and respect for one another remained. Rynell took many paths in his career, ultimately working in the Healthcare industry where he was given the opportunity to travel and reside in multiple states where he met and befriended many. He lived in California for over 10 years, finally settling down in Carmichael. He propelled himself through life with his intelligence, and his unabashed quest for knowledge. He was a very strategic chess player, and avid reader. There are so many things about Rynell and his zest for life, too many to list. The most that sticks out is that he was spontaneous and did exactly what he wanted to do. He loved jazz music and enjoyed traveling all over to jazz festivals and concerts. He has traveled to various parts of the world including Europe. During his pilgrimage to Africa, he visited Egypt and got more intrigued with the Ancient Egyptian history. He made multiple trips to Brazil, his destination choice to celebrate his birthday. He loved cooking and deemed himself a self-taught gourmet chef, specializing in Asian, Indian and South American cuisine. He was never afraid to mix it up with seasonings. He made most dishes by taste and never used a recipe. He loved martial arts and had an inherited passion for boxing which he learned from his uncles and passed down to his son and grandsons. But with all that said, his most notable trait was his passion for SHOPPING! He was an exceptionally sharp dresser. He took pride in his appearance and would not leave the house until his clothes were perfect. He leaves to cherish his memory, wisdom, dignity and love his loving family; his son Rahsean, daughter-in-law Sabrina; grandsons Amahri, Kingston and Asad; sister Kimberly; brother Chase Hanee, sister-in-law Sheree; nieces Cora, Courtney and Kelley Brinkley; nephew Slade Hanee; great niece Aeryn Ralls and great nephew Ezra Jones; Closest first cousins Antoinette (Toni) Dixon and Terrence Dudley who were both more like siblings to him. He also leaves to mourn his aunts and uncles, many cousins and other family members and dear friends. He had a special place in his heart for Kasimah El-Amin, with whom he shared his love and life. Rynell was and will always be deeply loved The Legacy Continues….

The family of Rynell Dixon created this Life Tributes page to make it easy to share your memories.

Send flowers to the Dixon family.