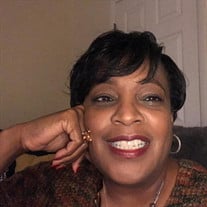 February 10, 2021 marked the end of Rita Elaine Watkins’ earthly journey. Rita Elaine Watkins, a first-generation Washingtonian was born to Charles and Teretha Watkins on November 10, 1962. She spent most of her formative years in the Hillcrest/Ft. Dupont section of the city. She attended Dupont Park Seven Day Adventist school and graduated from Notre Dame Academy. She attended Tuskegee (Institute) University and the University of the District of Columbia. She began her professional career at Perpetual Bank and worked many years in the banking industry moving upward from teller to branch manager/assistant vice-president over the course of her career. She earned several certifications: project management, training specialist, and training facilitator. Rita was a longstanding member of Hughes Memorial United Methodist Church. As a youth, she was a junior usher, acolyte, member of the Methodist Youth Fellowship and choir member with the Inspirational Singers. As an adult, Rita service as a liturgist and a member of the Senior Ushers. She led and trained many junior ushers and young acolytes. Rita was the co-coordinator for the Washington Interfaith Network (WIN) partnership between WIN and Hughes Memorial. She chaired the Church and Society ministry for several years. Rita faithfully served, most recently as the Trustee Chairperson. In gathering her possessions from the nursing home, she has written a list of things she felt she needed to do. One of those items was to “write a note to the congregation.” Rita loved her church and her church family. Rita joined Esther Chapter No. 6 and Keystone Grand Chapter, Order of the Eastern Star on July 20, 2002. She was a dedicated member who worked tirelessly in Esther Chapter No. 6 and become the Worthy Matron in 2005. She later became the Worthy Matron of Electa Chapter No. 3. She was the Keystone Grand Chapter Lecturer for a number of years. She also served in the Upper Houses. She was Lecturer of the Deborah Court No. 1, Heroines of Jericho, Chief Counselor of the Lady Knights, Magaline Council No.1, a member of Julia Wallace Court No. 6, Daughters of Sphinx and Rose of Sharon Court No. 1, the Royal House. Rita enjoyed a good laugh. Her photogenic smile would always light up a room. She could recite movie parts as though she were the script writer. Appearance was important to Rita; she always had her nails done, her hair coiffed and her lipstick fresh. Rita was preceded in death by her parents, Charles and Teretha Watkins. She leaves to mourn her only daughter, Breanne Alyce Williams; her grandson, Cree Allen; her grandson-in-love, EJ Allen; her son-in-love, Eric Allen; her sister, Valerie P. Shade; his brother, Reginald Watkins; her nephew and his family, Earvin, Mia, Aubrie, Hollis, and Ethan Shade, her special friend and movie partner, Terry Tibbs as well as a host of relatives and friends. Since you’ll never be forgotten, we pledge to you today A hallowed place within our hearts is where you’ll always stay.

February 10, 2021 marked the end of Rita Elaine Watkins&#8217; earthly journey. Rita Elaine Watkins, a first-generation Washingtonian was born to Charles and Teretha Watkins on November 10, 1962. She spent most of her formative years in the... View Obituary & Service Information

The family of Rita Elaine Watkins created this Life Tributes page to make it easy to share your memories.

Send flowers to the Watkins family.