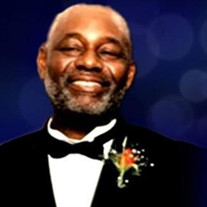 Richard Eugene Johnson Sr. (also known as Slim) made his transition on Monday, January 17th, 2022, at George Washington Hospital, Washington D.C. Richard was born on July 24, 1943 in Crumpler, West Virginia to the late Russell David Johnson and Elizabeth Hounshell Johnson. He later moved to Washington, D.C. and attended DC Public Schools. A few years later, he married the love of his life, Aurelia Johnson (deceased). Richard was a Cook at Wilson’s Restaurant on 7th Street, NW. He loved all sports, but basketball had his heart. His favorite was the Washington Football Team (Redskins). He enjoyed spending the holidays with his children, grandchildren and great grandkids. He was into fashion and had a love for shoes. He was known as the “baddest” dancer in the neighborhood. Richard had an infectious smile that spread ear to ear. It was a beautiful smile that was inherited by many of the Johnson offspring. Richard never met a stranger because everywhere that he went he would always meet and talk to people. Richard was preceded in death by his one sister Annette Johnson and two brothers Russell Alphonso Johnson and William Lewis Johnson. Richard leaves to cherish his memories; his five children: Richard E. Johnson Jr., Gwendolyn M. Vinson, Michael A. Johnson, Michelle Johnson-Law and Elizabeth A. Johnson; ten grandchildren: Alec, Richard, Tamara, Tiffany, LaToya, Michael, Sydney, Justin, Dominque, and Maurice; great grandchildren and a host of aunts, nieces, nephews, cousins, and friends.

The family of Richard E. Johnson created this Life Tributes page to make it easy to share your memories.

Send flowers to the Johnson family.