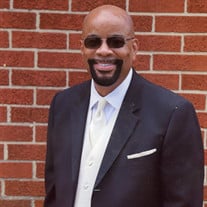 The Obituary The Beginning – Reverend Ceron Andre Pugh, Sr. was the second of three children born to the late Robert and Audrey Pugh on May 13, 1954, in Washington, DC. Education - Ceron was educated in the following DC public schools: Charles Young Elementary, Browne Junior High, and Calvin Coolidge High School. He graduated from Bowie State College, now Bowie State University. After Bowie State, he went onto higher education at Howard University and Maple Springs Seminary later in life. Employment History - During his life, Ceron worked for several industries. He started his career as a youth working for the Department of Interior, National Park Services. During and after college, he worked for several grocery store chains. For the past thirty years, Ceron worked as a Mortgage Loan Officer. Early Life – Ceron attended Vermont Avenue Baptist Church and accepted Jesus Christ as his personal Savior at the age of ten. He was baptized on April 12, 1964. Ceron attended Sunday School and was a Youth Usher during the Junior Worship Hour. Family Life – On December 21, 1981, Ceron was united in marriage to Ruth Washington. Four children (Ceron II, Corban (deceased), Cory, and Cierra) were born out of this union. Organizations – Ceron was a member of the Omega Psi Phi Fraternity. He was a long-standing member of the National Association of Real Estate Brokers (NAREB), Inc, Prince Georges’ Chapter and served as the Vice-President and the immediate past President of United Realtist of Prince George’s County (URPGC). Servant Life – On February 8, 1987, Ceron rededicated his life to Christ under the late Pastor Cortez Davis, founder and Pastor of LeDetroit Baptist Church, Oxon Hill, MD. While at LeDetroit, Ceron served in the Media, Sunday School, and Deacon Ministries. In 1995, the Lord led Ceron to First Baptist Church of Highland Park, Landover, MD to continue his spiritual growth under the late Pastor James McCord. While at First Baptist, Ceron served in the Youth (Awana), Security, and Armor Bearer Ministries. He also taught Discipleship and Crown Financial Ministries classes. After Pastor McCord's retirement, the Lord led Ceron to New Canaan Baptist Church, Washington, DC in 2001 to continue his spiritual growth under Pastor Gregory M. Sims. While there, he served as a Sunday School teacher. He also worked with the Trustee and Men's Ministry. The most important event in Ceron's life was the day he was licensed to preach God's word as a Minister. He was later ordained as a Reverend. In 2007, Ceron accepted a full-time ministry position at The New Macedonia Baptist Church, Washington, DC, under Pastor Patrick J. Walker. Ceron was Pastor of the Discipleship Ministry. In 2009, the Lord led Ceron back to LeDetroit Baptist Church to assist Pastor Wayne K. Bumbry. Ceron headed the Education Ministry, served as Chairman of the Trustee Ministry, and led the Men’s Ministry and Security Team. Teaching God’s word was Ceron's passion. He loved encouraging men, women, and children to trust God for everything. Memories - Ceron will be remembered for many things: his servant heart, humble spirit, love of life, beautiful smile, boisterous spirit, his commanding voice, and the way he befriended everyone that he came in contact with, whether young or old. Our most important memory of Ceron will be his love for GOD, Family, and Friends. The Ending - On Thursday, March 4, 2021, God called his beloved son Ceron home. He leaves to cherish his memories: his wife Ruth; three children Ceron II (Hana), Cory (Sherica), and Cierra; two grandsons Ceron III and Amari; one sister Arthene and one brother Darius (Pam); one mother-in-law (Carrie), one godson Jamyle and one goddaughter Michaela; one uncle, six aunts, a host of nieces, nephews, cousins, and friends.

The Obituary The Beginning &#8211; Reverend Ceron Andre Pugh, Sr. was the second of three children born to the late Robert and Audrey Pugh on May 13, 1954, in Washington, DC. Education - Ceron was educated in the following DC public schools:... View Obituary & Service Information

The family of Rev. Ceron A. Pugh, Sr. created this Life Tributes page to make it easy to share your memories.