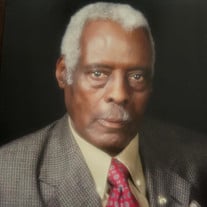 Rawleigh F. Fitzgerald, Sr. (Jack) of Washington, DC peacefully passed away on September 14, 2021 at Walter Reed Military Medical Center. Rawleigh Fitzgerald was born in Danville, VA in 1924. He married Nannie B. Inge and they celebrated 50 years of marriage before she passed in 2000. This union produced seven children, Gail Sullivan, Judy Parker, Rashidah “Robin” Jones (David), Ivy Berry Gill, Rawleigh Fitzgerald, Jr. (Keisha), Kim Chambers and Toni Wimby (Eugene); 19 grandchildren: Robert, Brian, Jameela, Jahaan, Jibreel, Subhana, Sabriya, Sahrah, Shani, Kevin, Rashaun, Rashaad, Sky, Gerry, Shakima, Joseph, Jasmine, Eugene III and William; 9 great grandchildren: Idris, Abdulkareem, Nahi, Donovan, Kendl, Eden, Chandler, Rakyiah and Trinity. Rawleigh Fitzgerald, Sr. is survived by his sister Amanda White, sisters-in-law, nieces, nephews, cousins, friends and neighbors. He is predeceased by his wife Nannie B. Fitzgerald, his parents Sallie Fitzgerald and Jerry Fitzgerald, children Judy Parker and Rawleigh Fitzgerald, Jr; and granddaughter Jahaan Parker. Rawleigh, affectionally known as “Jack”, and Nannie had a helpful heart when family members left Danville, VA for a better life and stopped by Jack and Nannie’s for little as overnight up to a year while finding their way. Rawleigh joined the United States Army at 19 years old and served in World War II. He was the sole survivor of his platoon in Okinawa after a typhoon. The Lord had his hand on his life in the Army and throughout his 97 years. He was also in the U.S. Army reserve and retired as a Master Sargent. He held various positions at the CIA for over 20 years before retirement and would even drive a cab to supplement his growing family. Rawleigh received his GED from Armstrong High School. He joined Redemption Chapter No. 24 in 1958. He was a member of the following organizations: Redemption Lodge No. 24, Prince Hall (PHA), DC; Grand Inspection General 32nd Degree Mason, Henderson Commandery No. 2 Knights Templar; Mecca Temple No. 10 and Imperial Council, A.E.A.O.N.M.S. where he served and attained the title of Honorary Past Imperial Potentate.  He was also a member of Holy Royal Arch Mason, P.H.A., and Redemption Chapter No. 14, Order of Easter Star, P.H.A., American Legion 275 and the NAACP. Rawleigh had a strong belief in the Lord. He was a member of Mount Paran Baptist Church. He was a member of the Men’s Choir. He would frequently quote scriptures and break out in song to his family. Leadership was his greatest quality. He and Nannie provided us with the greatest roadmap to follow. Rawleigh instilled in his children the importance of grades, education and home ownership. This emboldened his children to believe in themselves, so all obtained a college degree and became homeowners. We learned the meaning of hard work and how no one would respect you unless you first respected yourself. Due to COVID restrictions, the funeral is limited to immediate family

Due to COVID restrictions, the funeral is limited to immediate family

Send flowers to the Fitzgerald, family.