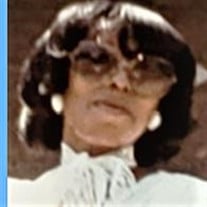 In Loving Memory of Pauline Harper Her Life, Loves and Legacy On February 15, 2021, Pauline departed life. She was born February 4, 1944. She was 78 years old. Pauline has joined her beloved mother Ida B. Turner and her much loved son, Orlondo T. Harper. Pauline was a very happy person and loved to help people. She left behind to morn her, 2 daughters, Subreana Harper and Sonya Harper Carter as well as her dedicated sister, Georgia M. Wilson and her very close nephew, Reverend Elton Wilson whom she called Samuel, and Keith Turner. She also left behind, 2 loving nieces, Tawanna Davis (Denise) and Regina Nix, 2 grandsons, Andre Harper (baby boy) and Orlondo Harper, Jr., (lil Dino) granddaughter of the heart, Ronniece Carter. She was blessed with 5 great grandchildren and her very good friend and confidant, Joseph B. Harper, Pauline also had a friend of many years, Katie. She also leaves behind; a very dedicated son-in-law, Ronnie Carter and a host of other family and friends. Pauline had a passion for nursing and started out working at a convalescent home on Spring Road, NW. Afterwards, she decided to work for herself as a private duty home care giver, having clients such as the former Mayor of Washington, D.C., Walter Washington for 7 years until his passing after which she cared for his wife. She also had a political passion and worked as a commissioner at the 4th District Precinct as well as campaigning and planning balls and events for the likes of Norman Neverson who won his election as counselor. She also had associations with Cathy Hughes, attending large picnics with Ms. Hughes and the Moore Better Man and personalities such as The Moon Man and Sister Souljah while at the same time, exposing her children to these political personalities Pauline had another passion and it was dancing, she loved to two-step. She was very well known for dancing even given respect by club owners for her oldie but goodies with the likes of the famous Breeze on Bladensburg Road in NE DC and exposing her children to Kiddie Cabarets to learn how to associate and also dance. Graveside Service (TBA) National Harmony Memorial Park 7101 Sheriff Road Hyattsville, MD 20785

In Loving Memory of Pauline Harper Her Life, Loves and Legacy On February 15, 2021, Pauline departed life. She was born February 4, 1944. She was 78 years old. Pauline has joined her beloved mother Ida B. Turner and her much loved son,... View Obituary & Service Information

The family of Pauline Harper created this Life Tributes page to make it easy to share your memories.

In Loving Memory of Pauline Harper
Her Life, Loves and Legacy...

Send flowers to the Harper family.