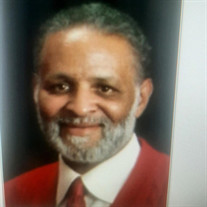 OBITUARY FOR NORMAN HODGES Norman Hodges transitioned to his eternal heavenly rest on Wednesday morning, February 16, 2022. He was born April 13, 1954, in Los Angeles, California to his parents, Melba and Norman Hodges, Sr. One of four siblings, he was raised in Compton, California and graduated from Compton High School. He attended Compton Junior College and the University of Maryland to further his education. Affectionately, known as “Norm and later, Pastor Norm”, he was a devoted family man and loved his wife and son. They were joined in holy matrimony, with a Christmas theme wedding 37 years ago at Howard University School of Divinity Chapel. Their only son, David, was born in 1989. In addition to their son, David, they also raised Alexandra as their own daughter in their home for ten years, who lost her parents, and helped her achieve her dream of achieving a college education this past December. Norm was a “Master Auto Detailer,” in the industry and conducted business with all cultures. He founded his first business in 1990, Manifest Auto, a hand car wash, with one bucket, a mop, and putting his right hand on a photo copier that generated a flyer which read “hand car wash, the difference you can see.” This humble beginning was at the corner of 3rd and M Streets, NE, Washington, DC. Over the years, Norm expanded his auto detailing business to as many as 7 locations at one time and added a diversity of cleaning services for commercial vehicles, accounts with CNN for its news trucks, tour buses to include septic tank emptying services, boat and yacht cleaning at local marinas, residential pool cleaning, and construction site contracts for new building window cleaning. Because of giftedness with his hands, love for auto detailing, and abilities to provide outstanding customer service, workplace parking garages became available for him to set up auto detail locations with property management companies; Boston Properties, Heitman, and Equity Offices in DC, Maryland, and Virginia. In the summer of 1993, he opened a downtown location at the law firm of Steptoe & Johnson. He serviced the attorneys at Steptoe for over 20 years. Norm always felt that one of his crowning achievements was the last location he set up at 2200 Pennsylvania Avenue, NW next door to Whole Foods, on the campus of George Washington University. During the life of his business, he hired over 300 ex-offenders, giving them a second chance. While partnering with Gospel Rescue Ministries, a recovery ministry for the addicted and homeless men, he personally conducted over 610 mid-week Bible studies, 500 8am Sunday morning services, and served as the Volunteer Homeless Men’s Coordinator in the evenings to help them restore their lives. For many years at Gospel Rescue Ministries, he and his wife hosted a Christmas Morning Breakfast for homeless men and GRM clients, Annual Christmas Eve Dinner for Fulton House of Hope women in recovery, and New Year’s Eve Service for homeless men and clients of GRM who could not attend traditional Watch Night Services in the city. Pastor Norm personally led over 1700 men to the Lord. Those who will forever cherish memories of his life are his beloved and devoted wife, Ellis, his son, David, daughter, Alexandra, brother, Reginald Hodges, cousin, Curren Price, wife, Del Price, brother-in-law, Ben Jones, sister-in-law, Pola Jones, mother-in-law, Dr. Vanilla Wilson, beloved dog, Bentley, and a host of relatives and friends.

OBITUARY FOR NORMAN HODGES Norman Hodges transitioned to his eternal heavenly rest on Wednesday morning, February 16, 2022. He was born April 13, 1954, in Los Angeles, California to his parents, Melba and Norman Hodges, Sr. One of four siblings,... View Obituary & Service Information

The family of Norman Reginald Hodges created this Life Tributes page to make it easy to share your memories.

OBITUARY FOR NORMAN HODGES
Norman Hodges transitioned to his...

Send flowers to the Hodges family.