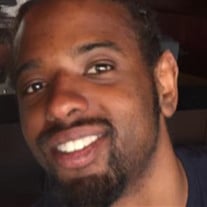 Nicholas Antoine Hill April 15, 1989–August 11, 2021 Nicholas Antoine Hill was born in San Angelo, TX, and spent his childhood and adult years in Glen Burnie and Bowie, MD, where he resided for the past 16 years. He attended Odenton Christian School, Calvary Baptist Church Academy, and graduated from Glen Burnie High School. He later attended Prince George’s Community College in Largo, MD. Affectionately known as Nick, he was baptized at an early age at Full Gospel Emancipation Church in Odenton, MD. An ardent sports enthusiast, Nick played soccer and basketball during his school-aged years, winning awards in the Severn Athletic Club. Nick also enjoyed with delight watching different kinds of sport games with his father. Anyone who knew Nick witnessed the close-knit bond he shared with his dad. Not a day passed when you would not find the two catching up on the latest sports news and events of the day. Another love of Nick’s was video gaming and spending time with his sisters. From challenging them on Xbox and PlayStation to attending their sport games, he was a loving big brother with a consistent presence in their lives. He loved his sisters dearly, and especially shared a close bond with Natalie. All of his sisters were named after him. Nick began his professional career with the United Postal Service and later moved into the warehouse distribution industry where he remained for more than 10 years. He worked for companies such as Pitney Bowes and Amazon. Always curious about learning new skills, he expanded his career to add auto detailing to his list of talents. Nick leaves to cherish his memory, father Gregory J. Hill (Deidra) of Bowie, MD; mother Janice Weber (Michael) of Severn, MD; sisters Nicole, Natalie, Nola, and Narissa Hill, all of Bowie; grandmothers Bernice Singleton Hill of Sumter, SC, and Marice Brooks of Odenton, MD; aunt Seymonia Hill Charles (Lincoln) of Rock Hill, SC; uncles Seymour Hill, Jr. (Tanya) of Dallas, TX; Larry Hill of Atlanta, GA; Rev. Burdell V. Hill of Sumter; and Daryl R. Wright of Washington, DC; step siblings Johnny Weber and Kim Weber; and a host of cousins, other relatives, and friends. Grandparents Seymour Hill, Sr. of Dalzell, SC, and Clarence and Maudie Wright of Lanham, MD, preceded him in death.

Nicholas Antoine Hill April 15, 1989&#8211;August 11, 2021 Nicholas Antoine Hill was born in San Angelo, TX, and spent his childhood and adult years in Glen Burnie and Bowie, MD, where he resided for the past 16 years. He attended Odenton Christian... View Obituary & Service Information

The family of Nicholas Antoine Hill created this Life Tributes page to make it easy to share your memories.

Send flowers to the Hill family.