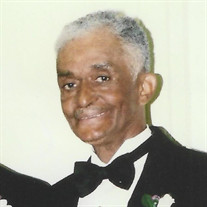 Obituary Mervin Elwood Archer, Sr. affectionately known as “Trigg” peacefully transitioned on October 2, 2021 at the Veterans hospital in Washington, D.C. after a brief illness. He was born December 31, 1933 in Washington, D.C. to the late Irving Archer, Sr. and Louise Murray Crawford. He was educated in the D.C. Public school system and would often share fond memories of his early family life growing up in Georgetown. He received salvation in Christ at Morning Star Baptist Church as a young lad under the covering of his maternal grandfather the late Reverend Lindsay C. Murray who pastored the church for 32 years before his retirement in 1971. Mervin later joined A.P. Shaw United Methodist church of Southeast Washington, D.C. and was a faithful member of the Usher board for many years. In June 1953 he was enlisted into the U.S. Army during the Korean Conflict Era and Peacetime, served in the 710th Tank Battalion until August 1955 when he was transferred to the Reserves from Camp Stewart, Georgia. He received an Honorable discharge June 20, 1961. In conjunction with his military service in 1958 he pursued career training under Raphael A.N. Smith Associates Tailoring School, then continued his education and received certifications from Armstrong Adult Education Center in Washington, D.C. in Barbering Science and Electronic Technology. This training allowed him to continue a journey of selfless service to others. “Mr. Trigg” or “Archer”, as he was mostly known, loved riding his Harley-Davidson Hog and was always lending his skills to those in the community; barbering was offered to young boys and men in the neighborhood regardless of the ability to pay, (he strongly believed in staying well-groomed and being neat and clean) he also offered repair services of televisions, stereos, and radios etc. in the same spirit. At times people would give televisions that they no longer wanted and they were in turn lovingly gifted to someone in need. He loved all he encountered, always greeting with a hug, a kiss and a handshake. In June 1980 he joined the A.A. fellowship and faithfully served 41 years supporting others in achieving sobriety, lending his support to those in need of transportation, telephone conversations, sponsorship and his powerful but gentle wisdom and guidance as a speaker helped many at the start and those continuing a journey of a new way of living – always giving GOD the glory. He loved his devoted wife Evora (his Safronia) of 60 years and all of his extended family. He is preceded in death by brothers Irving Jr. and Robert Archer and two sons Mervin, Jr. and Allen Archer. He leaves to celebrate his life his loving, devoted wife Evora, one brother Elder Alfred Archer (Lucy) of Ashburn, Virginia, two sons Antonio (Ethel) and Patrick (Antoinette) Boney, four daughters Torlanda Archer, Tanya Johnson (John), Cassandra Morgan (Michael) and Tawana Davis (Kenneth), first born granddaughter Donna “Missey” Archer Smith, nephew Elder Steven Archer (Stacey), nieces Angela Rorie (Aaron) of Virginia and Deborah Archer of Pennsylvania, fourteen grandchildren, eighteen great-grandchildren, four great-great grandchildren, a vast host of extended family and a multitude of loving friends.

Obituary Mervin Elwood Archer, Sr. affectionately known as &#8220;Trigg&#8221; peacefully transitioned on October 2, 2021 at the Veterans hospital in Washington, D.C. after a brief illness. He was born December 31, 1933 in Washington, D.C. to... View Obituary & Service Information

The family of Mervin Elwood Archer Sr. created this Life Tributes page to make it easy to share your memories.

Send flowers to the Archer family.