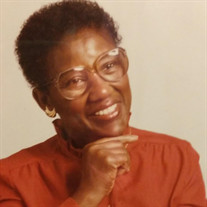 A Life Well Lived Mary was born on Feb. 7, 1927 in Southampton County, Va., to the parents of Tonce Cutler, Sr. and Laura Walden Cutler. She was the only girl, and sister, among five brothers. So, between life on the farm, and the rough and tough of growing up with all boys, Mary had True Grit long before John Wayne came along. Mary accepted Jesus Christ as her personal Savior at an early age and was baptized at Pleasant Plan Baptist Church in Drewryville, Va. She grew up with a strong faith in God, the church and the community. Mary met and married David S. Vick in 1943 and to this union, three children were born – Dorothy Elizabeth, James David, and Rosalyn Renee. David preceded Mary in death. Though Mary only completed elementary school, the education, health, and welfare of her three children, were, by far, her highest priority, and her greatest source of pride and accomplishment. From elementary school through high school, you can count on one hand the Parent-Teacher Association meetings Mary missed. Her children were going to be respectful, they were going to learn, and they were going to do well. She worked, tirelessly, to make that happen, and see all three of her children with graduation diplomas and pictures on the wall – HER wall. Immediately after moving to Washington, D.C. in 1967, she chose Isle of Patmos Baptist Church as her new church home. Just as she had served at Pleasant Plain, Mary served at Isle of Patmos as a dedicated usher and church servant with Crusaders for Christ. She always looked forward to the annual York, Pa. Fair trips and the fun and hilarious usher Christmas parties. However, she never lost her roots. Mary continued to return to Virginia and attend the homecoming services on the fourth Sunday in August at her beloved Pleasant Plain Baptist Church to unite with family and friends. For years, the Monday after the fourth Sunday was the start of Mary’s big vacation week. She and her best friend, and fellow Isle of Patmos usher, Bessie Johnson, found room for at least two home-grown watermelons in the trunk of her car, as they headed south to Myrtle Beach, S.C. for a week of fun in the sun. Next to God and her children, Mary cherished her freedom to drive herself wherever and whenever she wanted. After traveling to Myrtle Beach for so many years, she, quite naturally, claimed part ownership of the Best Western Landmark. There, she began her mornings at the breakfast buffet with a full plate of bacon, eggs, toast, hash browns, and the hottest cup of coffee on the planet. She worked off those hardy meals by walking or riding a bike on the Board Walk and later floating on the Lazy River at the hotel. She had her relaxing moments, but everybody noticed, and will tell you, that Mary Cutler Vick worked much harder than she played. After 25 reliable and devoted years with Guest Services Incorporated, she didn’t stop her full measure of service to others. She joined the Washington Urban League as the Food Prep Coordinator for the Fort Lincoln Seniors, going beyond her required duties and personally ensuring that everyone was properly fed “and cared for.” Mary was so young at heart and spirit that, even in her 70s, she referred to her beloved seniors at Fort Lincoln as “those old folks.” Mary’s big secret: Before becoming a Philadelphia Eagles fan, Mary was a diehard Dallas Cowboys fan. Living in D.C., you can appreciate her secret. Her colorful stories about riding the bus to work the Monday after a Dallas win would keep us in stitches. On the baseball diamond, however, she never strayed from the Dodgers – from Brooklyn to LA – win or lose. To cherish Mary’s memory are all three of her children, Dorothy Vick of Atlanta, Ga., James Vick of Seminole, Fla., and, Rosalyn Vick Williams (Will) of Lexington Park, Md., two brothers, Earven Cutler of Lawrenceville, Ga., and Tonce Cutler, Jr. of Washington, D.C., three God-daughters, Rev. Denise Johnson of Marlboro, Md., Donna Poole Harris of Severn, Md., Bettye Ward of Oxon Hill, Md., 4 nieces and 3 nephews. Three siblings preceded Mary in death, George, Sr., James and Welfort

A Life Well Lived Mary was born on Feb. 7, 1927 in Southampton County, Va., to the parents of Tonce Cutler, Sr. and Laura Walden Cutler. She was the only girl, and sister, among... View Obituary & Service Information

The family of Mary C. Vick created this Life Tributes page to make it easy to share your memories.

Send flowers to the Vick family.