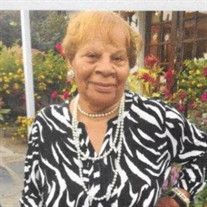 OBITUARY Peacefully, on April 2, 2021 Mary Ethel Whitley Sherard went home to be with her Lord. Mary Ethel was the youngest daughter of the late Howard and Maggie Whitley. Preceding her in death was her beloved husband Ulysses L. Sherard of 53 years and her devoted sister Demerice Bernice Whitley Erwin. Mary Ethel was educated in her early years in the Public schools of Washington, D.C. She graduated from the historic Richard B. Harrison High School in Selma, North Carolina. She attended Winston- Salem’s Teachers College for two years and finished her education at Strayer Business College. Mary Ethel worked for the U.S. Navy Department, where she met her future husband and partner Ulysses L. Sherard; this union lasted 53 years. They were married December 22, 1951 at the home of her parents in Washington, D.C. To this union two daughters were born, Ursula Bernice and Irene Maggie. Mary Ethel worked for Department of the Navy, Department of Health Education and Welfare and United States Department of State, Agency for International Development for many years as an Executive Secretary for Foreign Service Officers; where she was recognized with many awards for her outstanding service. Mary was raised in the African Methodist Episcopal Church. She was a member of Turner AME church in Washington. D.C. and later joined John Wesley AME Zion, with her husband after the deaths of her parents. She joined under the pastorship of the late Dr. E. Franklin Jackson. As a member of John Wesley AMEZion Church , she served actively in: the January Club, Funeral Repast Committee, Missionary Society, Deaconess Board, Flower Guild, and Sunday School Teacher and remained a faithful active member until her death. Mary Ethel and her husband lived in Dallas, North Carolina for a number of years and attended Humphrey Chapel, AME Zion church in Dallas, North Carolina. They entertained many John Wesley church members while visiting to North Carolina.. This was her husband’s childhood church. They later returned to Washington, DC in 1998. Mary Ethel and the late Lillian McCormick were the co-founders of two social clubs, the “Merry Mixers” and “The Futurelite Clubs”. Mary Ethel loved to travel; she and her husband traveled around the United States by train going to cities: Chicago, Seattle, Los Angeles and New Orleans. She also enjoyed cruises and traveling to Bermuda, Rome, Italy, Barcelona, Spain, French Rivera, London, France, Cancun, Canada and Belize, South America. Mary leaves to mourn and cherish the memory of her life, her two daughters, Ursula Bernice Sherard and Irene Sherard Franklin; one son-in-law Drew Franklin; two nephews George (Sandra) Sherard of Winston-Salem, North Carolina and Richard Erwin Jr. of Yadkinville, North Carolina; and a host of relatives and friends.

OBITUARY Peacefully, on April 2, 2021 Mary Ethel Whitley Sherard went home to be with her Lord. Mary Ethel was the youngest daughter of the late Howard and Maggie Whitley. Preceding her in death was her beloved husband Ulysses L. Sherard... View Obituary & Service Information

The family of Mary E. Sherard created this Life Tributes page to make it easy to share your memories.

Send flowers to the Sherard family.