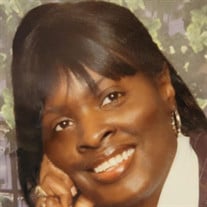 Minister Mary Lou Davis, 67 years old, died on Sunday, January 9, 2022 at Fort Washington Hospital after a short illness of pneumonia. She was born on July 31, 1954 in Washington, DC. She was raised in Capitol Heights, Maryland by both of her parents William and Mary Davis along with six other siblings. Minister Mary Davis was born on July 31, 1954 to William and Mary A. Davis in Washington, DC. After Mary graduated from Central High School in 1973, she went on to earn an Associates degree in Business at the University of Maryland. After graduating college, she began working for the United States Department of Agriculture (USDA), in Washington, DC this kick started a 40 plus year of federal government service. She loved her job and traveling around to different countries. Mary worked as a Marketing Specialist with USDA until her passing. She will be remembered for her unwavering generosity, kindness, and willingness to assist everyone she encountered. Minister Mary Davis gave her life to the Lord at an early age. In the early 1980’s, Mary was ordained a Minister and received her certificate at the GateWay to Heaven Pentecostal Church in Washington, DC. Minister Mary Davis loved music, and enjoyed singing and was blessed with a beautiful voice. In her early years she performed with a group called “The Gospel Jubilees”. She also loved singing around the house for family members and friends. Mary loved hymns and was known for her spirit filled renditions of “Jesus will work it Out" and “Going up the Yonder”. Minister Davis was a God fearing woman who loved the Lord. On June 29, 1985, she was united in marriage to George Bellamy in Upper Marlboro, MD. She has three children Andrea "Tina" Hefley, Jonathan "John" Bellamy and Aaron Bellamy. She was always sacrificing her needs for the good of her family, she will also be remembered as a selfless mother who always had a smile, even when times were tough. She had a quiet strength that could not be measured. In the mid 980's, Minister Mary Davis received her license from the State of Maryland to do Foster care. She worked with Foundations Foster Care Corporation for many years. Mary cared for over a hundred children in need for more than 25 years. All that entered her home was always treated as one of her own children. She was an inspiration to many and a mom to all that were in her care. Minister Mary Davis attended the "New Saint Matthew Inter-denomination Church where she served under the Pastorate of Pastor John Wiggins. She also served as assistant pastor of the church. Mary would always be front and preach the word of God. Mary will forever be remembered for her beautiful smile, big heart, home cooked Sunday dinners, singing, taking care of her family, and cheering for the Dallas Cowboys. Minister Mary Davis leaves to cherish in her memory her daughter Andrea "Tina" Hefley (Kai) and two sons Jonathan "John" and Aaron Bellamy; eight grandchildren Shanice Barnes, Nyasia (Ny-Ny)Hardy, DeMarco Hefley, Jonathan "Lil John" Jr , Journeii, Tayon, Jaivon Bellamy and Aden Robinson; two great-grandchildren Christian and Tori Barnes; father William Davis; two brothers Kenneth "Kenny" and Donnie"Lee" Davis; two sisters Phyllis and Cynthia"Ann" Davis; three sister-in-laws Donnella McNeil, Michelle Davis; and Lisa Watson-Davis; four nieces Breonna Bland, Karen, Kim and Tracy Davis; six nephews Edward (Sharon) and Craig McNeil, Christopher Bland, Samuel "J.R." and Jamal Davis; children at the Foundation Foster Care whose lives were changed because of her generous spirit and other close family and friends. She was preceded in death by her husband George Bellamy; mother Mary A. Davis; two siblings John "Noise" McNeil and James "Tim" Davis; two nieces Davoness McNeil and RonShay Davis; and one nephew Kenneth "Ken-Ken" Davis, Jr.

Minister Mary Lou Davis, 67 years old, died on Sunday, January 9, 2022 at Fort Washington Hospital after a short illness of pneumonia. She was born on July 31, 1954 in Washington, DC. She was raised in Capitol Heights, Maryland by both of her... View Obituary & Service Information

The family of Mary Lou Davis created this Life Tributes page to make it easy to share your memories.

Send flowers to the Davis family.