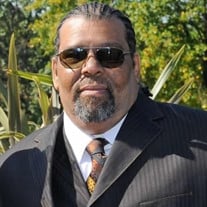 Mario P. Jones was born on March 31st, 1955 and adopted by the late Carl and Barbara Titus of St. Albans, Queens, New York. Growing up, he spent time between New York and Florida. He attended military boarding school in Great Barrington, MA. His high school years were spent at Litchfield Preparatory School in Connecticut where he played on the Junior Varsity Basketball team, The Lancers, and his nickname was Mario “Million-Moves” Titus. Mario returned to New York City and established a family-owned tow truck business called "Two Gals". He loved cars and fixing them. After several years, he relocated to Washington, D.C. and worked as a Service Manager and Cook. During this time, Mario experienced homelessness while overcoming a drug addiction. He showed compassion to those who have walked a similar path and shared his experiences in hopes to inspire. He cared deeply about his family and community. For the last 20 years of his life, he resided in the Waterfront neighborhood of D.C. and frequented the Wharf when he was able to ride his bike. His hobbies included fishing and gaming. He loved fried fish despite doctor’s order not to fry his food. But when do you know Mario to follow the rules?! He lived by the beat of his own drum. He was an avid gamer known as RawAssassin355/al-Qaidaassassin who commanded soldiers and lead through battle. When he was not fighting wars and zombie dogs, did you know Mario binge-watched old British sitcoms on Netflix? Yes, he loved the classics. Also, he enjoyed cop shows like Blue Bloods and Law & Order series. There were times he was reserved, but to those who were close to him, he enjoyed participating in family gatherings and just being around loved ones including his cats. Mario was down to earth and a fun person. He had a colorful personality and loved to share outrageous stories with whomever would listen. He was passionate about culture, history and politics. Being so close to the Capitol, he slept with one eye open like a true conspiracy theorist! When he told stories, he was filled with so much conviction, it was hard to debate with him. Sometimes, you may leave scratching your head about a story, but you had to love him and just laugh! Classic Mario! Mario’s wishes were to be cremated and return to his favorite place, Jamaica, that he visited several times as a young man. Mario was a father, grandfather, and friend who is survived by a blended family that includes Tracy Titus Keyser (daughter), Anthony Keyser (Son-In-Law), Titus & Roman Keyser (grandsons), Sharon Turner and Sabrina Turner (cousins), Kamryn Greenfield (daughter), predeceased by Pamela Thomas (life partner), and the Southwest Waterfront community.

The family of Mario P. Jones created this Life Tributes page to make it easy to share your memories.

Send flowers to the Jones family.