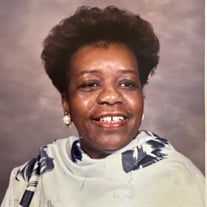 Mamie Jean Gantt On March 15, 2022, God sent his holy angels to take his daughter Mamie to rest. Mamie was born in Norfolk, Virginia on May 24, 1934, to the late Charlie Franklin Brown Sr. and Eliza Wilson Brown. Mamie was sent to Baltimore, Maryland to be raised by her first cousin The late Mary Jones and Aunt Catherine Simpson due to her mother's death. She was introduced to the wonders of our heavenly Father at a very early age in the home and at The Church of God where she was a participant in their drama programs. She was educated in the Baltimore City public school system, and upon graduation she was the first black female to be admitted and graduated with honors from The University of Maryland (Baltimore campus) School of Roentgenology. Later changed to Radiology. She left Baltimore and moved to Washington, DC, where she began working at the Walter Reed Army Medical Center. She went on to work at the VA Medical Center, Area C. Chest Clinic; and finally at The DC General Hospital where she retired. Mamie was married to Gerald Oliver Gantt for 42 years, however, unfortunately lost him to illness. Mamie loved to travel and had visited many states in the US and overseas. She had the opportunity to visit Africa, several countries in Europe, and in the Caribbean. She loved the arts and would attend plays and various concerts. She was a member of the G. Street Senior Community Center. She loved God and her church and would let you know that she belonged to " The New Macedonia Baptist Church". She was a member of the #2 usher's ministry, hospitality, missionary and drama ministries. She was a Past Matron of The Order of Easter Star Pha, Electa Chapter#6; Washington DC. Mamie was preceded in death by brothers: Joseph Jones (Buster), George Brown, Rufus Brown Sr. and Charlie Brown jr. She leaves to mourn daughters Rosalyn Williams (Benjamin), Portsmouth Va; Cynthia Gantt, Hyattsville, Md; Angela Thompson Special niece, Mansfield Tx; Step son Gerald O. Gantt (Dawn) Owings Md, Step daughter Giselle Gantt, Ellicott City Md, Sister-in-law, Charlotte Chase, Baltimore, Md. Brothers Warner Day,( Verona) Randallstown, Md; Charles Brown (Shirley) Hampton Va/Philadelphia Pa, Elder Joseph Brown (Lillie) Hampton Va, Joshua Brown (Darlene) Norfolk Va; one sister Lucy Nicholson( Nick) of Hampton, Va. God sons Marc Fitzgerald and Rupert Jones. The loves of her life her grandchildren Jasmine Cosby, Jakera Webb, Janae Motts(Clay), Jared Horton and Jayla Horton and a host of relatives and friends.

Mamie Jean Gantt On March 15, 2022, God sent his holy angels to take his daughter Mamie to rest. Mamie was born in Norfolk, Virginia on May 24, 1934, to the late Charlie Franklin... View Obituary & Service Information

Send flowers to the Gantt family.