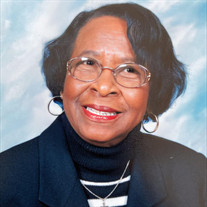 Letitia Nancy Fields Nedab was born on January 22, 1930, in Raleigh, NC, the third child of Spurgeon and Jeannette Shepard Fields. Known affectionately to everyone as "Tish," she was raised in the Oberlin community in a house once known as the Graves-Fields House. That house is now the headquarters for Preservation NC. Growing up, Tish was precocious and known for her vibrant sense of humor and enjoying laughs with her brother, Spurgeon Jr., "Gabe," and cousin, Addison "At" Shepard. She graduated from Washington High School in Raleigh and matriculated to Saint Augustine's University (Class of 1959). She always remained a proud SAU Falcon and would later help other young people attend her alma mater. Like her sisters, Tish became an educator and specialized in working with students with learning challenges. She began in the Culpeper (VA) public schools and later moved to Washington, DC, where she worked in the DC Public Schools for more than 30 years. After retiring from DCPS, she spent a few years with the Maryland Public Schools at a local elementary school. While teaching was her passion, her true love was her family. Tish was very close to her baby sister Jeannette and the two always lived within a short drive (or walk) of each other. Along with their older sister Mary Elizabeth, they often sang together in church. She met and married her soul mate, Bernard, in the early 60s and remained with him until he earned his heavenly reward in 2000. Together they were devoted and active members of Second Baptist Church, led by Rev. H. Joseph Franklin, Sr., in the church's original home in SW DC. Tish enjoyed singing in the choir and the Gospel Ensemble, and she and Bernard also ran the church's daycare center for a short time. Tish and Bernard opened their hearts and home to family, friends, and several beloved dogs: Colet, Kojack, and Honey. Legend has it that early on in life, her love of socializing kept groups of friends stopping by her parents' house, sometimes without much notice. Tish's affinity for bringing people together led her to collaborate with family and friends to host the Washington High School alumni's annual Labor Day weekend gathering at the family home during the 1980s and early 90s. In addition to her church and family activities, Tish was an active and dedicated member of Alpha Kappa Alpha Sorority, Inc. She regularly attended several Boules and regional conferences and often donned her pink-and-green paraphernalia when stepping out. She leaves behind her sister Mary Elizabeth "Lib" Haywood, step-son Bernard Garrison, nieces Marjorie ["Margie Harris"] Fields Harris, Rosalind Fields Arnold (Mark), Andria Fields, Lucy "Sissy" Nedab-Shedrick (Reamer), and Marva A. Bundy; nephews Edward "Eddie" (Francis) Harris, Spurgeon "Plinky" Fields, III, Oliver B. (Denise) Nedab, Morris Nedab, Alvin (Deborah) Nedab, Dorsey (Carol) Nedab, Douglas (Darlene) Nedab, and Edward Nedab; cousins Melanee Haywood, Randolph Shepard, Richard Irving Shepard, Addison "Skippy" Shepard, Jr., and Gloria (Addison) Shepard; great-nieces Mecca Naeem Harris, Lejla Bobongie-Harris, Tallullah Bobongie-Harris, Taylor Coleman, Faith Brim, Maya Journey Arnold, and Colin Sage Arnold. In addition, she will be missed by those she counted as her children, Rev. David Godbolt, Dr. Osbert (Evelyn) Applewhaite, Carla Truitt, her Second Baptist Church family, and many other family members and friends. A memorial service will be held on Saturday, March 26, 2022, at 11 am at Lea Funeral Home, 2500 Poole RD, Raleigh, NC 27610

Letitia Nancy Fields Nedab was born on January 22, 1930, in Raleigh, NC, the third child of Spurgeon and Jeannette Shepard Fields. Known affectionately to everyone as "Tish," she was raised in the Oberlin community in a house once known as the... View Obituary & Service Information

The family of Mrs. Letitia Fields Nedab created this Life Tributes page to make it easy to share your memories.

Send flowers to the Nedab family.