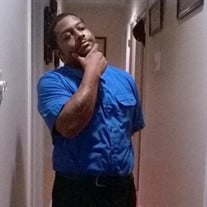 Kevin Marcus Kendall was born on August 15, 1986 to Yvette Chapman and Brahm Persaud at Washington Hospital Center in Washington, DC. He departed this life on Monday July 12, 2021. He attended Draper Elementary School in Washington DC until he reached Junior High School where he attended Drew Freeman Middle School in Suitland MD, Suitland High School and then onto graduate from Crossland High School in Temple Hills. MD. He furthered his education by attending Prince George's Community College in Largo, MD. Not long after this is when he met Quanay Lynch, his partner and mother of his three beautiful children Khloe, Kenneth and Kendrick. Kevin was a rambunctious, adventurous, true to his sign (Leo) stubborn child. He loved riding his bicycle around the neighborhood (this is how he broke his arm), playing spades and video games with his brothers Anthony and Kenneth as well as his uncles. His favorite movie was “Home Alone” and he would watch it over and over again whether we liked it or not. He loved listening to music and going to the studio to record music with his cousin Alexis (Lex). Growing up, McDonald’s was his favorite fast food, especially their cheeseburgers and french fries, which he did not like to share. Kevin was very talented and good with his hands. If he broke it, he could actually fix it as well. Sometimes he just enjoyed taking things apart to see how they worked and challenged himself to put it back together. This led him to his career in Cable Installation with the companies RCN and Verizon. He took pride in his work and all of his great accomplishments. He relocated to Allentown, PA temporarily for work and this is where he met one of his best friends Rene Muniz. Kevin is preceded in death by his brother Kenneth Kendall Jr, his grandmother Delores Chapman and Stepfather Eric Beale. He is survived by his children Khloe, Kenneth, Kendrick (Quanay Lynch), mother Yvette Beale, father Brahm Persaud, godfather Kamal Majeed, brothers and sisters Anthony Hall, Jonelle Hall (Rodney Fleming), Priyadarshini Persaud, Dwayne Jackson, Mahadeo L. Persaud, Ra’nee Hilliard, Brahm N. Persaud Jr. and Indie Wallace- Persaud, uncles and aunts Kimric Chapman (Sylvia Chapman), Kevin Chapman (Soni Chapman), Kenneth Chapman, Keith Chapman, Joyce KC (Hari KC), nephew Rodelle Fleming and a host of family and friends. Kevin will be deeply missed and forever loved. His legacy will continue to live on through his three beautiful children Khloe, Kenneth and Kendrick.

Kevin Marcus Kendall was born on August 15, 1986 to Yvette Chapman and Brahm Persaud at Washington Hospital Center in Washington, DC. He departed this life on Monday July 12, 2021. He attended Draper Elementary School in Washington DC until... View Obituary & Service Information

The family of Kevin Marcus Kendall created this Life Tributes page to make it easy to share your memories.

Send flowers to the Kendall family.