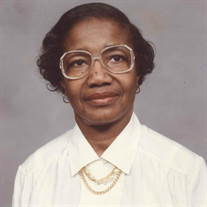 Juanita Evelyn Heywood was born on November 16, 1926, in Houston, Texas, to the late Washie and Charlotte (Epperson) Heywood, the oldest of two children, elder sister of Anolia. Juanita and her sister enjoyed summers in Galveston. As a young girl, she learned homemaking skills and became quite adept at cooking and sewing. She attended Phillis Wheatley High School and later worked briefly in various jobs, including a beauty salon. Juanita visited a friend in Washington, DC and decided it was the place for her. She relocated and stayed at an all-women boarding house, enjoying life, which led to meeting Virgil Harris. Both shared a love of music, especially jazz, dancing and attending concerts in DC. They married on August 9, 1946. From that union was born two sons, Virgil and Ronald. While her sons were young, she also attended night school at Cardoza High School. Juanita was a good steward of the household. Juanita believed in Christ and was a woman with strong character. She taught her sons to stand up for themselves and to never let someone take advantage of them, make them feel inferior, or question their ability to succeed. Obstacles were meant to be overcome. She taught her sons the value of education, including drilling them on the multiplication tables. As young men, she prayed fervently for their safe return from the Vietnam War. She loved caring and teaching her children, grand and great-grandchildren. She attended Church services and enjoyed watching several TV ministries, deepening her knowledge of the Word of God. Juanita enjoyed taking long walks and chatting with friends and family. In later years, she loved theater at the Greenbelt Arts Center and was quite thrilled to see the movie, Black Panther. She also enjoyed watching many classic and Hallmark movies. Juanita loved deeply and was deeply loved. She leaves to cherish her memory, Virgil (Anne) and Ronald Harris (Renee); four grandchildren, Ronald Harris, Chantese Newman, Wykeim Harris, Dominic Harris; seven great-grandchildren, two great-great-grandchildren; special friend Sheila Collins, and a host of other relatives and friends. In addition to her parents and husband Virgil, Juanita was preceded in death by sister Anolia Lee Heywood, and grandson, Virgil Harris, III.A burial service will be held at Quantico National Cemetery. In lieu of flowers, memorial donations may be made to the Dementia Society of America, https://www.DementiaSociety.org/donate or Capital Caring Health, https://www.capitalcaring.org.

Juanita Evelyn Heywood was born on November 16, 1926, in Houston, Texas, to the late Washie and Charlotte (Epperson) Heywood, the oldest of two children, elder sister of Anolia. Juanita and her sister enjoyed summers in Galveston. As a young... View Obituary & Service Information

The family of Juanita Evelyn Harris created this Life Tributes page to make it easy to share your memories.

Send flowers to the Harris family.