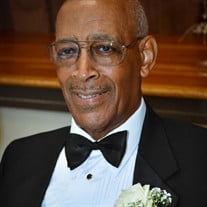 On January 3, 1937, Joseph A. Coleman, the youngest of six children, was born to the late Thomas A. Coleman, Sr. and Willie B. Coleman in Washington, D.C. His siblings, Thomas, Frances, John, William, and Bernard preceded him in death. Joseph attended the District of Columbia Public Schools and graduated in 1955 from Cardozo Senior High School. He served in The United States Army National Guard as a marksmanship instructor and received an honorable discharge. While in high school, Joseph met Gwendolyn Pryor, and they got married on July 1, 1955. They have been encouraging, caring, and nurturing each other with love for over 66 years. Their children, Lenwood, Ronald, Darlene, and Kevin witnessed the devotion their parents had for each other and were blessed to be reared in a loving home where family values, Christian virtues, and hard work were modeled and encouraged. Joseph worked for the Headquarters, US Postal Service at L'Enfant Plaza, in Washington, D.C. for more than 43 years, retiring January 3, 1992, after receiving numerous service awards. In 1958, Joseph joined the Dupont Park Seventh-day Adventist Church. He was a faithful member who actively participated in many church ministries. He thoroughly enjoyed church life and was willing to do whatever was needed to bring glory to God and to foster the mission of the church. He faithfully served in the Lay Activities Department, the Pathfinders Club, and the church Building and Renovation Committee. He sang with the Male Chorus and served as a Sabbath School teacher and a deacon of the church. He and his wife, Gwendolyn, were founders and co-chairs of the Love Feast Committee which helped to welcome and nurture new members of the church. He also volunteered at the Dupont Park Adventist School as a gym teacher and a school bus driver. On Sabbath evening, February 5, 2022, Joseph fell asleep in Jesus and now awaits the sure and certain hope of the second coming of Jesus Christ when the dead in Christ shall rise first. Joseph leaves to cherish his memories his devoted wife, Gwendolyn; one daughter, Darlene Jones (Antonio); three sons, Lenwood, Ronald (Julie), and Kevin Coleman; 11 grandchildren, Lynne, Lenwood II, Tenisha, Rachel, Allaena, Patrick, Lesley, Daniel, Michael, John, and Briana; 16 great grandchildren, Lenwood III, Jaxson, Abriany, Kahlia, Kalisha, Korie, Khalil, Londyn, Tristan, Miracle, Maleina, Mikaela, Kalel, Bella, Kiyo, and Jaden. Also left to cherish his memories are three sisters-in-law, Ruth Coleman, Burnisteen Coleman, and Sarah Coleman-Pyndell.

On January 3, 1937, Joseph A. Coleman, the youngest of six children, was born to the late Thomas A. Coleman, Sr. and Willie B. Coleman in Washington, D.C. His siblings, Thomas, Frances, John, William, and Bernard preceded him in death. Joseph... View Obituary & Service Information

The family of Joseph A. Coleman created this Life Tributes page to make it easy to share your memories.

Send flowers to the Coleman family.