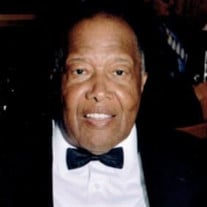 In the early morning on Tuesday, April 20, 2021, John Herbert Morehead, Sr. was called to eternal rest to be with the Lord. John was born on June 7, 1932, in Guilford College, North Carolina, to his beloved parents, Henry and Annie Morehead. John was the younger of 2 sons. At an early age John accepted Christ and was baptized at Raleighs Cross Roads United Methodist Church in Guilford, North Carolina, where he remained a devoted member until his departure from North Carolina in the 50’s. John continued his love for the Lord by joining John Wesley A.M.E. Zion Church in Washington, D.C. He served as a faithful member for over 60 years. John received his early education at Woodyside Elementary School in Guilford College, North Carolina, and graduated from Dudley High School in Greensboro, North Carolina. After high school, John attended North Carolina A&T State University where he received an Associate Degree in Vocational Education. While a student at A&T, John met Lannie and they began the journey of a lifetime that lasted 67 years. He later continued his education in Washington, DC, at Catonsville Community College and Washington Technical Institute. John was employed for 34 years as a Supervisory Institutional Officer for the Department of Human Services, Youth Services Administration for the District of Columbia. He retired in 1987 and continued working with youth as a substitute teacher in the Prince Georges County School System. Affectionately known as “Big Daddy,” John was an outgoing and fun loving man. He was well known for his smiling face, deep throated laughter, kindness, and generous spirit. John was a sports fanatic. He coached his sons in youth sports and was a devoted fan of the Washington Redskins. John was an avid golfer and member of the People’s Golf Club where he received many trophies. He also enjoyed going on fishing trips with his friends. John was a cool dancer with smooth moves. He could dance all night two-stepping and line dancing. When John arrived, the party began. He loved playing pinochle and bid whist, and was a member of the Kings and Queens Pinochle Club. He won many trophies. John and Lannie became small business entrepreneurs in the 80’s and established a well known business called “Lannie’s Ceramics.” They traveled extensively throughout the U.S. attending Alpha Kappa Alpha Sorority, Inc., conferences. John was a longtime faithful member of his neighborhood civic association, the Tantallon Area Square Civic Association, serving as Block Coordinator and Financial Secretary for many years. The warm, rich and cherished legacy he leaves behind is a devoted wife of 67 years (Lannie); daughter (Donna Marie); 3 sons: John, Jr. (Jeannette), David Christopher, and Todd Henry (Lorna); older brother George (Mae); 3 grandchildren: John III (Iyona), Sierra, and Laila; great granddaughter Jersey; sisters-in-law: Constance (Oscar), Eula, Henrietta, Joan, and Lula; and a host of nieces, nephews, cousins, and friends. His life was well lived and will forever be treasured with the fondest of memories. Family request that in lieu of flowers, contributions be made to John Wesley A.M.E. Zion Church, 1615 14TH Street, NW Washington, DC 20009 ATTN: Scholarship Fund-in memory of John H. Morehead, Sr.

In the early morning on Tuesday, April 20, 2021, John Herbert Morehead, Sr. was called to eternal rest to be with the Lord. John was born on June 7, 1932, in Guilford College, North Carolina, to his beloved parents, Henry and Annie Morehead.... View Obituary & Service Information

The family of John Herbert Morehead Sr. created this Life Tributes page to make it easy to share your memories.

Send flowers to the Morehead family.