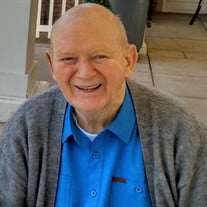 John Roland Garrett passed away peacefully in his sleep on July 6, 2021 at the age of 73, in Denver, Colorado. He was born September 16, 1947 to Roland and Mary Garrett in Washington, DC. On November 14, 2020 he celebrated his 50th wedding anniversary with his loving wife, Bonnie. John graduated from Bladensburg High School before enlisting in the Air Force in 1968, serving in Vietnam. He took classes at night to receive his Bachelor’s Degree from Park College and later got his Master of Science in Management from Troy State University. After graduating with his Bachelor’s Degree, John went to Officer’s Training School and became a First Lieutenant. He would later serve in the United Arab Emirates during Desert Shield/Desert Storm before retiring from Scott AFB as a decorated Captain after 24 years. He considered everyone a friend and had a special place in his heart for four-legged, furry friends. Those that love John will always remember him for his mischievous grin and contagious laugh. He enjoyed watching college football, sailing, painting, playing the piano, going for walks, eating cookies, and reading to his grandchildren. John will be lovingly remembered by his wife, Bonnie, and his sons John (Brooke), David (Dawn), and his three grandchildren, Jayden, Andrew, and Collin, and his two brothers, Robert (Kathy) and Joseph (Janet). A Memorial Service will be live-streamed from the Little Ivy Chapel at Fairmount Cemetery in Denver, Colorado on July 14, 2021 from 10-11am MT. John will then be buried with full military honors in Washington National Cemetery in Washington, DC at noon on July 19, 2021. In lieu of flowers, your donations can be made to the Denver Dumb Friends League (an animal shelter), in memory of John Garrett, online or by mailing a check to Dumb Friends League, 2080 S. Quebec St., Denver, CO 80231-3298. A visitation will be held at Marshall March Funeral Home in Suitland, MD on July 19, 2021 from 10:30 - 11:30 am. July 19, 2021 10:30-11:30am Marshall-March Funeral Home 4308 Suitland Rd Suitland, MD 20746 The committal service and military honors will be held at Washington National Cemetery in Suitland, MD on July 19, 2021 from 12:00 - 1:00 pm. July 19, 2021 12:00-1:00pm Washington National Cemetery 4101 Suitland Rd Suitland, MD 20746

John Roland Garrett passed away peacefully in his sleep on July 6, 2021 at the age of 73, in Denver, Colorado. He was born September 16, 1947 to Roland and Mary Garrett in Washington, DC. On November 14, 2020 he celebrated his 50th wedding anniversary... View Obituary & Service Information

The family of John Roland Garrett created this Life Tributes page to make it easy to share your memories.

John Roland Garrett passed away peacefully in his sleep on July...

Send flowers to the Garrett family.