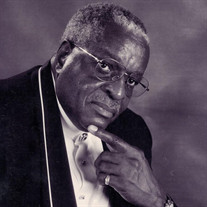 Joe Louis Butler was born on May 6, 1941 in Bedford, VA to the late Lucille Butler. He made his heavenly transition peacefully on Friday, January 28, 2022 after a long illness at Lorien Columbia senior living community in Columbia, Maryland. Joe gave his life to Christ and joined Otterville Baptist Church at an early age. Joe was educated in the Bedford County School System where he graduated from Susie G. Gibson High School in 1960. The school was recently listed in the National Register of Historic Places. He also attended Virginia State University and majored in Automotive Engineering. He was a member of ROTC. He later moved to Washington, DC following his sister, Katherine Patra. Joe was employed by the United States Department of Defense with almost 39 years of service where most of his tenure was at The Pentagon. He was a dedicated worker. During his career, Joe received numerous awards and special recognitions for his work. He retired from The Pentagon in 2003. Joe occasionally visited Independent Church of God and proudly called it his church home and Pastor Stewart his pastor. He was a devoted son, brother, uncle, nephew, cousin, godfather and friend. He enjoyed watching sports, especially his favorite DC teams, golfing, traveling, photography, flying radio-controlled airplanes, auto mechanics, skiing, spending time with family and friends, and enjoying life. Joe was always there lending a helping hand to his friends including providing transportation to and from doctor’s appointments and keeping their vehicles running in tip top shape. Joe loved fellowshipping with his family during the monthly family bible studies, birthday dinners and on holidays. Joe leaves to cherish his memory a loving and devoted sister, Evangelist Katherine Patra Butler Oglesby, of Washington, DC, nephew/godson, Gerardi Oglesby (Jacqueline) of Clinton, MD, niece, Lolita Oglesby of Upper Marlboro, MD, great-niece, Gabrielle Oglesby of Richmond, VA and a host of cousins, godchildren and friends who loved him dearly. The Homegoing Celebration will be held at Independent Church of God located at 2302 Ainger Place SE, Washington, DC 20020, Overseer Claritha A. Stewart, on Monday, February 7, 2022. The viewing will begin at 10:00 a.m. and the service (family only) will begin at 11:00 a.m. Interment, Maryland National Memorial Park in Laurel, MD. “MASK REQUIRED”

Joe Louis Butler was born on May 6, 1941 in Bedford, VA to the late Lucille Butler. He made his heavenly transition peacefully on Friday, January 28, 2022 after a long illness at Lorien Columbia senior living community in Columbia, Maryland. Joe... View Obituary & Service Information

The family of Joe Louis Butler created this Life Tributes page to make it easy to share your memories.

Send flowers to the Butler family.