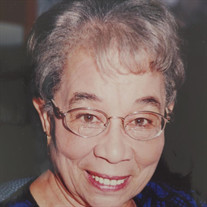 Jeanne Suzanne Wharton Jeanne S. Wharton (nee Martin) was born in Washington, D.C. along with her sisters, Mary, Billie, Lillian and the youngest sibling, Maurice Julian (nicknamed, Sonny) lived on Caroline Street, N.W. until she married, Lawrence E. Wharton (Larry) on September 26th, 1942. Once asked how she met Larry she said “He lived next door to me temporarily”. Larry’s family lived in New York and later he and Jeanne moved to the Bronx, New York where they lived `four (4) years. Larry had his own pet name for Jeanne. He called her “Skinny”. That she was! Petite and small framed. During their four (4) years in New York, their son, Guy Maurice, was born in October, 2nd, 1943. What a joyful time for them. Jeanne and Larry moved back to Washington, D.C. in 1946. Unfortunately, Guy, a 19-year career Army man (Sgt. 1st Class) and beloved husband of Ann Wharton, passed away at the young age of 38. Happily, Guy and Ann produced a wonderful son for Jeanne and Larry to love, Julian Maurice. Julian Maurice gave Jeanne and Larry a beautiful Great-Grandson, Jalen. In later years, Julian lived with his Grandmother and was a comfort to her in her last days. Jeanne’s professional career included 30 years with the Federal Government beginning with Departments of War and Navy, Bureau of Printing and Engraving and retiring after 16 years with Secret Service. Friends she made while at the Secret Service still kept in touch as recently as Christmas, 2021. Jeanne and Larry were long-standing members of the Washington National Cathedral Church. Jeanne served on the ushering board for over 25 years. We would be certain to watch for her on the Cathedral’s Christmas Eve telecast every year. We usually saw her, too! “Oh, look there’s Jeanne”! Jeanne loved traveling. Before retirement and after retirement, she and Larry traveled with friends and family across the country as well as internationally. Jeanne was a Longtime member of the Chowans Social Club whose activities included travel ad raising funds for charitable organizations. Jeanne and her husband, Larry also supported the national Continental Society Club. Let’s not forget what an avid Jazz enthusiast and wonderful dancer Jeanne was. We, your family, will miss you and the love we shared. Your nieces and nephews, Lila Stroud (Earl, d.), Paula Conley-Grasser (Johannes), Warren (Sam) Walker (Jerilynn), Bruce Walker (Wanda d.), Godmother of Leonardo Stroud, Great-Aunt to Sean Stroud (Leah) Peggy-Ann Griffin (Michael); Donald (Donnie) Martin, Jacque Bellamy (Tony) Diedre Hamilton, Nicole Johnson, Neicha Walker, Maurice Johnson, Martyn Johnson, d.) Deonna Walker, Lauren Walker, Jeffrey Walker, (Toni), Deborah Walker-Malone, K.J. Malone and Jay Chere Walker. Jeanne, although we have to you let go, you will always live in our hearts.

The family of Mrs. Jeanne S. Wharton created this Life Tributes page to make it easy to share your memories.

Send flowers to the Wharton family.