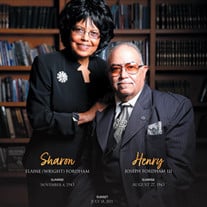 The family of Henry III and Sharon Fordham created this Life Tributes page to make it easy to share your memories.

To view the live-streamed service, click the link below:
https://www.visitaec.org/

Send flowers to the Fordham family.