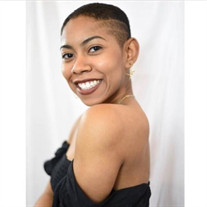 OBITUARY FOR GIAVANNI MALIA POWELL Giavanni Malia Powell ~~ a movement artist, choreographer, muse, poet, speaker, advocate and activist ~~ a young woman with a voice and vision to honor those that came before her and elevate those who will... View Obituary & Service Information

The family of Giavanni Malia Powell created this Life Tributes page to make it easy to share your memories.

Send flowers to the Powell family.