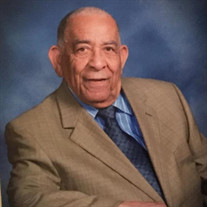 GEORGE PAUL DUGUE, JR., went home to be with the LORD, on Tuesday, June 29, 2021, at 1:35 am in Upper Marlboro, MD, where he has lived since Hurricane Katrina. George was born in New Orleans, LA on March 31st, 1930, to the union of Evelyn Joseph Dugue and George P. Dugue, Sr. George was baptized at Corpus Christi Catholic Church, served as an altar boy, and attended the school. He attended Xavier University Preparatory High School (The Prep) and graduated in 1947. It was at “The Prep” that George met his sweetheart, Jocelyn Watts. On July 21, 1951, George and Jocelyn were married. Together they raised 6 children, Belinda, Kathleen, Michael, Jennifer, Diane and Kerry. George served in the U.S. Army during the Korean War. After returning home, he worked for the United States Postal Service and retired as a supervisor after having been employed for over 30 years. He was also a member of the American Legion Post 395. George and Jocelyn had a very active social life. George was a member of the Knights of St. Peter Claver, 4th Degree, and Jocelyn, a member of the Ladies Auxiliary. They loved to travel, often going to the Knights of St. Peter Claver Conventions and US Postal Letter Carrier Conventions throughout the country. They also traveled to London, England, where Jocelyn was able to meet her childhood pen pal. George was one of the founding members of the Vikings Krewe in 1952. They enjoyed participating in the Mardi Gras Balls every year. He was also a member and served as President of the Autocrat Social and Pleasure Club, and they were members of the Twosomes Couples Club. An Avid Saints Fan, George had season tickets and he and Jocelyn loved going to the superdome. They always wore their Saints Jerseys, sweatshirts and hats. They watched the game win or lose. Later in life, George joined the Cursillo Movement, an Apostolic Movement of the Roman Catholic Church, and continued his involvement in Cursillo after moving to the Washington DC/Maryland area. George, was preceded in death by his wife, Jocelyn Watts Dugue, his parents, Evelyn Joseph Dugue Perez and George P. Dugue, Sr., his sister-in-law Sylvia Watts Frazier and brother-in-law Mitchell Frazier. He is survived by his 6 children, Belinda D. Simms (the late Joseph), Kathleen D. Jennings (Thad), Michael Dugue, Jennifer D. Tilghman (Timothy), Diane D. Whitlow (the late Donald), and Kerry G. Dugue, Sr. (Tracy), brother-in-law Phillip A. Watts, Jr. (Janice), 6 step-brothers, 2 step-sisters, 17 grandchildren, 31 great-grandchildren and 1 great-great grandchild and a host of caring nieces, nephews, and other relatives and friends.

GEORGE PAUL DUGUE, JR., went home to be with the LORD, on Tuesday, June 29, 2021, at 1:35 am in Upper Marlboro, MD, where he has lived since Hurricane Katrina. George was born in New Orleans, LA on March 31st, 1930, to the union of Evelyn Joseph... View Obituary & Service Information

The family of George P. Dugue, Jr. created this Life Tributes page to make it easy to share your memories.

GEORGE PAUL DUGUE, JR., went home to be with the LORD, on Tuesday,...