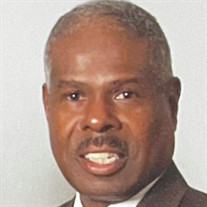 Garry Landry Taylor was born on March 11, 1951 in Washington, D.C. to Harold and Gladys (Barnes) Taylor. He graduated from Anacostia High School in SE Washington, D.C. A highlight of his life occurred on February 27, 1971, when he married his high school sweetheart, Paula Davidson. Together, they raised six children. He enjoyed watching football, especially the Washington Football Team. He was skilled in doing home and automotive repairs, even teaching his sons to perform these tasks. He introduced his love of camping to his family, often taking them on out-of-state camping trips that they enjoyed. Garry enjoyed dancing and music. He was a talented singer. In fact, in 1975, he and a group of friends released an album, where he was the lead singer of a four-part harmony group called “Positive Change.” However, he loved his family more and he also loved God. He once swore that if he ever came to know God, he would dedicate his children to Him. In fact, a real positive change occurred in the lives of Garry and Paula when they were contacted by Jehovah’s Witnesses during the early 1980s. When a pioneer sister began to study the Bible with them, they immediately knew that they had found the truth. From that time on, they began raising their children in the “discipline and admonition of Jehovah.” (Eph. 6:4) Garry and Paula were baptized on June 12, 1982. Garry taught his children to love and serve Jehovah. He was often known to tell his children, “No matter what happens to Momma or Daddy, stick with Jehovah!” More than urging his children to serve Jehovah, however, he set a good example for them by reaching theocratic goals himself. He served as an auxiliary pioneer a few times a year, and he had the privilege of serving as a regular pioneer for two years. As a congregation elder, he was known as an enthusiastic and effective teacher and public speaker, especially on subjects of science and family life. For decades he served as the Theocratic Ministry School overseer. He was also a kind shepherd, especially to the elderly. Garry is survived by his wife of 50 years, Paula; his six children and their mates: Aaron (Pamela), Ramona Yates (Donald), Nathanial (Roberta), David, Danial, and Laura; his grandchildren: Adrian, Jerel, and Janel; his sister Pat, his brother Kevin, and many other relatives and friends.

Garry Landry Taylor was born on March 11, 1951 in Washington, D.C. to Harold and Gladys (Barnes) Taylor. He graduated from Anacostia High School in SE Washington, D.C. A highlight of his life occurred on February 27, 1971, when he married his... View Obituary & Service Information

The family of Garry L Taylor created this Life Tributes page to make it easy to share your memories.

Send flowers to the Taylor family.