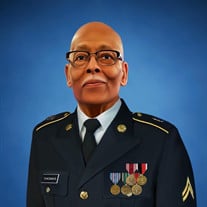 Frederick “Freddie” Lloyd Thomas, Sr. came into the world on November 1, 1924 (Sabbath Day) to Mr. and Mrs. Lloyd and Dorothy (formerly Bogle) Thomas and was LOVED from that day to this! He was the youngest of three and the only boy in the family. He dearly loved his older sisters and was very protective of them both. His father passed away when he was 3 years old. In 1943 he joined the U.S. Army at the age of 19, and during that year of his deployment he suffered the loss of his mother. He was reared in the home of his maternal grandparents the late Mr. and Mrs. Bogle of Baltimore, Maryland, where they instilled in him the qualities that made him a godly and respectful man. Freddie, as he was affectionately called by his family, joined the U.S. Army with the hopes of becoming a jet pilot and one of the famed Tuskegee Airmen. That dream, however, was thwarted by a commanding officer. He went on to serve in a postal company throughout Central Europe. During that tour he was under the command of General Dwight Eisenhower in the Battle of Rhinehart -a battle that the Allied Expeditionary Force believed would bring victory “within sight”. In 1946, Freddie was honorably discharged and returned home to Baltimore, MD. His decision to go to night school would prove to be pivotal in his life. It was this decision that led him to meet a beautiful, young woman by the name of Grace Simmons. He asked her if he could carry her books at the bus stop, and from that point on his was life full, exciting, prosperous and just BLESSED! On November 20, 1948, Freddie and Grace were joined in holy matrimony and remained blissfully married for 67 years until Grace’s death in 2015. Of that union, God blessed them with 6 wonderful children. Frederick L. Thomas always had a good sense of humor, which he passed on to his children. He was blessed to be the FIRST black fireman in the city of Baltimore, Maryland! Frederick suffered the first blow to his heart in 1974 when he unexpectedly lost his oldest son Frederick Jr. He worked for the federal government at the Social Security Administration and then at the U. S. Postal Service, retiring after 30 years of service. He enjoyed being retired with Grace by his side, going from one adventure to another together. They traveled more in retirement than they had in their working years. At 96 years of age, he was retired longer than he worked! In his lifetime, Frederick was a son, brother, soldier, husband, father, uncle, mailman, elder, assistant Pastor, father-in-law, grandfather, great-grandfather, friend, and mentor, prolific poet, and composer. He wrote poems encouraging fellow church members, friends and even several U.S. Presidents. He received a reply from President William J. “Bill” Clinton. Freddie also wrote a poem to the late actor Carroll O'Connor better known as Archie Bunker upon the unexpected loss of his son. Carroll replied as well, expressing his gratitude. As the Patriarch of our family - he led with love, dignity, strength, and humor, up until the very end. As his health began to quickly decline, he kept the faith, even as he uttered his last words - “I will bless the Lord at all times, His praise shall continually be in my mouth!”. He passed away quietly on April 24, 2021 (on Sabbath Day). He now awaits Christ’s return in that great getting-up morning! He leaves behind 5 children, Gregory A. Thomas, Sr. (Sandra), Denise F. Thomas-Hayden (Melvyn), Cecelia L. Thomas, Brian L. Thomas, Alida M. A. Thomas-Lawrence (William), 4 grandchildren, Zaneta D. T. Thomas-Attle (Paul), Gregory A. Thomas, Jr. (Nicole), Tisa N. Thomas, 4 great-grandchildren, Giovani Thomas, Gabriel Thomas, Paul Attle, Jr., and Zachary Attle, Nieces Saundra Washington, Alevia Nance, Nephew Petey Welch, Cousins Alma Brown, Butch Walker, and a host of other cousins, nephews, nieces, family and friends. In lieu of flowers, the family is requesting donations be made to the Nathan L. Anderson Memorial Foundation, Inc. www.RememberingNathanAnderson.org

Frederick &#8220;Freddie&#8221; Lloyd Thomas, Sr. came into the world on November 1, 1924 (Sabbath Day) to Mr. and Mrs. Lloyd and Dorothy (formerly Bogle) Thomas and was LOVED from that day to this! He was the youngest of three and the only... View Obituary & Service Information

The family of Frederick Lloyd Thomas Sr. created this Life Tributes page to make it easy to share your memories.

Frederick “Freddie” Lloyd Thomas, Sr. came into the world on...

Send flowers to the Thomas family.