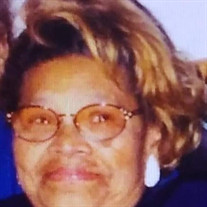 Eugenia Graham, daughter of the late Lonnie Wright and Anna Bell Wright, and wife to the late Japan Graham, was born in Lancaster South Carolina, on September 9, 1933. “Jeanie” as she was affectionately called came to Washington, D.C. in 1950 where she found a new and different life far removed from her rural agrarian birthplace. In 1951 she graduated from Cardozo High School with a degree and license in cosmetology. In her youthful years, she was known for her flair for fashion and took great pride in her golden blonde hair and physical appearance. She had a gift of befriending everyone(everybody knew her name), her famous saying was “let me tell you one thing when she said that she meant business. She had a smile that was genuine, and a heart full of love and respect. You knew it the moment you met her. She was a Master Cosmetologist for over forty years at various beauty salons along the Georgia Avenue Corridor. She had hands that could style any type of hair. Later in her career, she was finally able to own her own beauty salon named “Graham’s Beauty Salon” located on Marian Street N.W. She was a dedicated and faithful member of Mt. Olives United Missionary Baptist Church. During her spiritual journey just like anyone else she found herself leaving Mt. Olives and joining, Franklin P. Nash United Methodist Church in Washington, DC. She loved her Nash family and friends but, Mt. Olives was in her heart. It was in this role she was a Missionary Jeanie became a prayer warrior during services and a radiant beacon of hope to many friends and family members in times of sorrow and despair. She always reminded us with one of her many slogans “get on your knees and pray honey.” After a long bout of illness, her robe was complete God saw fit to bid her “come home” on Saturday, February 5, 2022, at 6:54 p.m. from her hospital bed at George Washington University Hospital, here in Washington, D.C. God found the need to call Jeanie home to join his heavenly tribe. May she forever Rest In Peace with Him. She leaves a loving and everlasting memory to her devoted son Lonnie(Michelle) four grandchildren, Taronda(Joy), Jaden, Jamari, and Somaya; four Godchildren, Samantha Hill, Gary Foster, Darius, and Danielle Styles; three sisters, Nancy Earl, Harrisburg, NC; Lucille Robertson, Charlotte, NC; Maeola Robison, Charlotte NC; one brother, Joseph Cepheus Wright of Concord, NC; and one Sister-n-Law, Eula Mae Wallace of Kingstree, SC; a host of beloved nieces, nephews, and other relatives. Also, to cherish her memory is a large extended family and special friends.

Eugenia Graham, daughter of the late Lonnie Wright and Anna Bell Wright, and wife to the late Japan Graham, was born in Lancaster South Carolina, on September 9, 1933. &#8220;Jeanie&#8221; as she was affectionately called came to Washington,... View Obituary & Service Information

Send flowers to the Graham family.