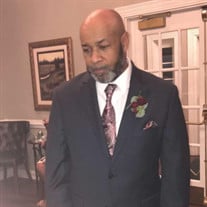 Errol Steven Jackson, better known as “Earl”, was the third son born to the late Herman and Rona Jackson on December 27, 1956, in Washington, DC. Errol was educated in the public school system of Washington, DC. After graduating from Dunbar Senior High school, he pursued a vocational education to obtain the skills needed to perform the job of an electrician. He worked for Kolb Electric and other electrical companies before accepting a position with Amtrak, where he completed his electrician career. Errol enjoyed being an electrician, as he served many friends and family members throughout the DMV area. He would drop whatever he was doing to help someone with an electrical problem. In addition to his career, Errol served in the Air Force Reserves. Errol was a very encouraging and friendly person and would converse with anybody. His outgoing nature made him extremely popular in the DMV area. We couldn’t go anywhere without someone stopping him to have a conversation. He wasn’t an avid sports fan, but he did have his favorite players. Whether it was a track meet for Anton or Robin, a football game for Greg, a basketball game for Siara or Kayla, or a soccer game for Camille, he was there. He would be late to work before he missed a game. Errol was always in the crowd cheering. Errol taught his sons his trade when they could go on side jobs. He was influential and stood as a father figure to his children’s friends, making them feel welcome and loved. He valued family and showed it through being a caregiver. Errol loved R&B music and he loved a charcoal grill. His specialty was simple, burgers and dogs. As soon as spring hit, and sometimes before, the smell of charcoal was in the air. He was preceded in death by his brothers, Carl Jackson, Ronald Jackson and Dennis Jackson. He leaves to cherish his memory; his wife, Pamela Jackson; children, Christopher (Wife), Anton (Jannette), Robin, Gregory (Rashada), and Siara; seven grandchildren, Kayla, Camille, Alora and Christopher’s four children; one brother-in-law, Dante Rogers; and a host of other relatives and friends.

Errol Steven Jackson, better known as &#8220;Earl&#8221;, was the third son born to the late Herman and Rona Jackson on December 27, 1956, in Washington, DC. Errol was educated in the public school system of Washington, DC. After graduating... View Obituary & Service Information

The family of Errol Steven Jackson created this Life Tributes page to make it easy to share your memories.

Send flowers to the Jackson family.