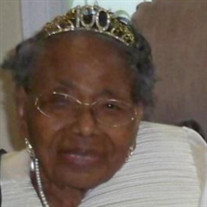 A Celebration of a Life Well-Lived Ernestine was born to the late Dan Prophet McLean and Brazzie Gainey McLean on November 23, 1919 in Sampson County, Dunn, North Carolina. Ernestine was their only daughter and youngest of four children. Ernestine was 101 years of age when the Lord called her home on October 14, 2021. Her passing was a result of complications due to a brain tumor, not COVID-19. Ernestine was taught the Gospel of Jesus Christ from an early age. She also studied music and learned to play the piano. She grew up in Dunn, NC and was a faithful member of the Sampson Chapel Freewill Baptist Church. She attended the local public schools. In her search for higher learning, she received her diploma from the Post Graduate School of Nursing in Chicago, Illinois in 1964. Ernestine was employed many years at Casualty Hospital. Later, the name changed to Rogers Memorial Hospital, from which she retired. Ernestine was known for her great smile, her charming demeanor, and she was loved by many. Anyone who came in contact with her will never forget her. Ernestine married the love of her life, James L. McNeal, and of this union four children were born: James Ernest, Lora Dean, Celestine Joy, and Zella Rose. In 1961, the family moved to Washington, DC, where they joined New Samaritan Baptist Church, then under the leadership of the late Reverend Dr. Robert Harrison. Ernestine’s husband, James, was ordained as a Deacon in 1962, and appropriately she became a Deaconness, faithfully serving in that position. Ready to serve, she washed and ironed baptismal apparel, assisted baptismal candidates, and helped prepare of Communion Sacraments. As God-sent partners, both she & her husband served under the leadership of Bishop Michael V. Kelsey, Sr., the current pastor of New Samaritan, until health challenges prevented them from doing so. Ernestine was preceded in death by her husband. She leaves to honor & cherish her memory, her son: James McNeal (Sharon) of Jacksonville, FL; her 3 daughters: Lora Branch of Richmond, VA; Joy Lee (Chris) of Temple Hills, MD; and Rose Williams of Fort Washington, MD; 1 sister-in-law: Ruby McPhaul of Gainesville, VA; and 1 adopted son: Winslow Jacobs (Jean) of Dunn, NC. She also leaves behind 8 grandchildren: Tina Telfair, Leslie McNeal, Andrekia Branch, Robert Branch Jr, Eboni Williams, Jonathan Lee, Shanice Singh, and Tyler Willis, along with 6 great-grandchildren: Brittani and Brielle Telfair, Eve and Ada Branch, and Myles and Malik Lee. Also, a host of nieces, nephews, other relatives, and friends. Deaconness Ernestine McNeal will be greatly missed and we will forever cherish the time spent with her. Funeral Services Entrusted to Marshall March Funeral Homes Suitland, MD Burial Services Entrusted to Dafford Funeral Home at Resthaven Cemetery in Dunn, NC An Angel An angel lived among us, A gift from God above. She showered us with kindness And shared with us her love. She cherished every moment With the man who was her life. Walking hand in hand together, Facing life with all its strife. She loved her children dearly, Each one a different way. Nestled close within her heart, Though, now, she’s far away. She’s gone to live with Jesus, But, she’s here with us, today. Smiling down on every one of us, And telling us she’s O.K. Author: Deborah Culver

A Celebration of a Life Well-Lived Ernestine was born to the late Dan Prophet McLean and Brazzie Gainey McLean on November 23, 1919 in Sampson County, Dunn, North Carolina. Ernestine was their only daughter and youngest of four children. Ernestine... View Obituary & Service Information

The family of Ernestine McNeal created this Life Tributes page to make it easy to share your memories.

A Celebration of a Life Well-Lived

Ernestine was born to the...

Send flowers to the McNeal family.