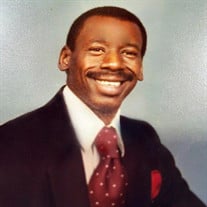 Ernest “Ernie” Brice Fletcher of Washington, D.C. departed this life peacefully and entered into everlasting rest on Monday, May 3, 2021. Funeral services will be held on Thursday, May 20th at Nativity Catholic Church, 6001 13th Street NW, Washington, DC. Visitation begins at 10:00 AM, and Mass will begin at 11:00 AM. The processional will follow to Mount Olivet Cemetery, 1300 Bladensburg Road NE. Funeral arrangements are entrusted to the Marshall - March Funeral Home, 4217 9th Street NW, Washington, DC 20011, (202) 723-1250. Ernie was born to the late James and Ernestine Fletcher on December 20, 1954. He grew up in the Brightwood area of Washington, DC with his parents, five brothers and one sister. There, he attended public schools and went on to receive his Bachelor of Science degree in Criminal Justice at Arizona State University. He loved his career in retail management, working for companies across the country. He played numerous sports in his youth, becoming an All-Star baseball player and continuing to be a sports enthusiast throughout this life. With a smile that lit up a room and a strong bond with family and friends, Ernie took great pride in the Washington home that his wife Bedelia made for him and their family. Preceding him in the afterlife were his parents and his brother Paul. To cherish his loving memories, he leaves his wife Bedelia Calhoun, his siblings, Thaddeus Fletcher (Donna), L. Raynell Fletcher, Norman Fletcher (Jang), Michael Fletcher, Leslie Fletcher(Jackie), Julius Fletcher (Donna) and Kimberly Ross (Lincoln), nine nieces and nephews and a host of loving relatives and friends.

The family of Ernest Brice Fletcher created this Life Tributes page to make it easy to share your memories.

Send flowers to the Fletcher family.