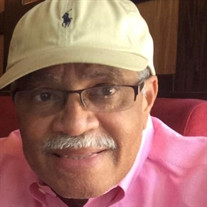 Elmer Matlock II was born on September 1, 1944 in Nashville, Tennessee to the late Elmer and Ida Mae Matlock. He was the oldest of four siblings and grew up in a close knit extended family.Elmer or Butch, as he was affectionately known by family was educated in Davidson County Public School System. He attended Fort Greene Elementary School, Johnson elementary School, Cameron Junior High School and Cameron High School. During his high school years he was a basketball player, an honor roll student, and active in the Science Club. He was voted “Most Distinguished” by his peers as a senior.. After graduating Butch attended Tennessee State University where he earned a degree in Science Education. His college years were spent happily staying with his beloved grandmother Pearl while he commuted to school and to work. During the latter part of college in 1967, Butch married Ruth Taylor. From this union a year later, his daughter Kimberly was born followed by Elmer III “BJ” in 1969, Colby in 1973, and Gabrielle in 1977. Upon graduating, Butch began his distinguished career as an educator in Nashville at Meigs Junior High. In 1980, after a move to Maryland, he continued teaching at Montgomery Blair High School and Richard Montgomery High School. In total, he taught life science, earth science, science labs, biology, physics, math and energy for over 45 years from 1968-2012. He was so valued for his knowledge and wisdom that he was asked to serve on numerous leadership committees including the Middle States Commission for Secondary Schools evaluation team and hiring/interview teams for his school’s principals. Butch was highly successful as well as popular and beloved among his students. He was renowned as being both firm but fun. He knew how to get the kids to achieve and also how to make them laugh. His specialization in teaching the “hard to reach” student was acknowledged with a Who's Who Award of American Teachers in 2003-2004. He not only touched the lives of students during the day, he changed lives by teaching science in night school for over 25 years at Weston, Einstein, and Northwood high schools. He should also be acknowledged for the many years spent teaching summer school. Butch was not only an exceptional teacher, he was a outstanding championship coach of basketball, track, and volleyball for both girls and boys on the junior high and high school levels. He won the following city titles or county regional championships at Meigs Jr High in Nashville, Tennessee: Track & Field 75, 76, 77, 78 & 79. (city title 78 & 79), Girls Basketball Division Champs: 1974, 1978, 1979, 1980,Girls City champs 1980. Runner up 79 & 81. Girls Volleyball Division & City Champs 1980. He won the following championships at Richard Montgomery High School: County Regional in Montgomery County MD: Girls Volleyball Regional Champs 1992 & 2011, Girls Division 1992, 201,Boys Volleyball County Champs 2004 & 2011,Boys Volleyball Division Champs 2004, 2010, 2011, 2012, Coach of the Year awards for volleyball in Montgomery County 9 times in total from 2006-2012 for girls and boys volleyball. Butch not only led students to championships, he served as a mentor and an inspiration to the students he served. He helped instill confidence and a belief in themselves. He demonstrated perseverance, work ethic, and leadership. In 2015, Butch was inducted into Richard Montgomery Athletic Hall of Fame for having a total of 9 undefeated seasons. Butch’s life changed at the age of 13 when he met Ruth Taylor at a church function through a mutual friend. They became inseparable and married years later on May 1, 1967. They shared their lives together for 55 years. Butch loved to say he knew Ruthie more time time than he did not. And he admitted that “she was the best thing that ever happened to him.” Butch had a rich family life that was filled with love and laughter. No one will forget the family meals, the stories and the famous “rides” through the city. He was a pillar of strength, security, and devotion for the family. Everyone knew that they could always depend on him to provide whatever was needed be it a meal, a ride, clothing, or an education. He was always there. His pride and joy were his children and grandchildren. He loved to brag about their characters and accomplishments to any who would listen. After working tirelessly on the behalf of students and to provide for his family, Butch developed health issues and retired from teaching and coaching in 2012. After spending years of working from sunup to sundown, Butch appreciated having unscheduled time and enjoying his family which has grown to include many grandchildren. Butch’s children and grandchildren were his pride and joy. He also took pleasure in the friends he had made over the years. Regretfully, his illness gradually took a toll over the years and he was called to rest after fighting for several years. Butch made his mark being an exemplary son, admired brother, steadfast father, dedicated husband, proud grandfather, outstanding educator, and winning coach. He will be remembered for his sacrifices, his great love, and his courage in the face of adversity. He will be cherished for his generosity, his humor, and his commitment to family and friends. Butch will be remembered by his family and by his God as much adored and beloved. Left to cherish memories of Elmer (Butch) are his wife Ruth Diane; his children Kimberly, Colby, Gabrielle; his grandchildren, Alexus, Ernest III (Trey), Christian, Colby, Isis, Judah, and Ethan; siblings, Carolyn and Michael; son-in-law Ernest; daughter-in-law Erica and a host of inlaws, cousins, nieces, nephews, extended family and friends.

Elmer Matlock II was born on September 1, 1944 in Nashville, Tennessee to the late Elmer and Ida Mae Matlock. He was the oldest of four siblings and grew up in a close knit extended family.Elmer or Butch, as he was affectionately known by family... View Obituary & Service Information

The family of Elmer V. Matlock, II created this Life Tributes page to make it easy to share your memories.

Send flowers to the Matlock, family.