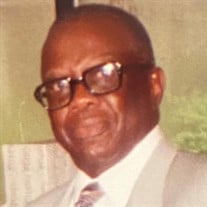 Our beloved Eldridge Allen, Jr. departed this life January 17, 2022 at the wonderful age of 94 years. He was the youngest of eight children born to Eldridge Sr. and Nancy Kimble Allen on July 28, 1927 in Grant Parish, Louisiana. He was educated in Grant Parish schools. As a young man, he was drafted into the U.S. Army in 1946. He was a veteran of the Korean war. During his military career, his first five years were in Germany. He earned a Purple Heart among other honors. Throughout his enlistment he traveled the world, yet his favorite destination was always back to his home town. He retired honorably after twenty-two years of service. While stationed at Camp Pickett Army Base in Blackstone, Virginia, he met Gwendolyn C. Harrison, a young nursing student who soon became his wife and life partner for more than 65 years. He and his bride located to Washington, DC. Three children were born to their union; Cornithia, Eldred (deceased), and Eldridge Rodwirth. With his family, he enjoyed fishing, cookouts, watching Washington, DC’s football team and pro boxing. A passion for automobiles led to a twenty-year second career as an auto mechanic with the U.S. Postal Service where he again retired in 1988. He was well known in his neighborhood for offering car maintenance advice and auto repair. Eldridge Jr. was a “tell it like it is” man—he spoke what was on his mind and seldomly apologized for it. Using his personal history, he guided and inspired others to appreciate the life presented to them and encouraged them to make the most of it. He also enjoyed boating, wood working and smoking a good cigar on his front porch. He meticulously manicured his home lawn until his health began to decline. He was most proud of his family, often speaking of his life in Louisiana, then in Washington, DC. Traveling to Louisiana was the highlight of his vacations. The true measure of his character showed in how he cared for his family, friends, and coworkers. He believed in a man’s obligation to work hard and care for others. He took this responsibility very seriously. Often, with a little coaxing from the love of his life, he trustingly handed over his wallet to support piano, art, photography lessons, and any sporting equipment needed to pursue an interest. He proudly attended boy scout events, little league football games, recitals, and graduations. Eldridge Jr. was a dedicated son, brother, husband, father, uncle, serviceman and friend. Eldridge Jr. is preceded in death by his parents, siblings, and his first son, Eldred. He leaves to cherish his memory; wife, Gwendolyn Claudell; daughter, Cornithia Allen Harris; son, Eldridge R. Allen; grandsons, Kahlil E. Allen and Colin C. Harris; sisters in-law, Queen Clark, Mattie Atterberry, Mattie Pickens, Janie Allen; brother in-law, Johnnie Harrison; godson, Frank Bell, and very special friends, Michael Fenwick and Merritt Burnett, in addition to many loving nieces, nephews, cousins and friends.

Our beloved Eldridge Allen, Jr. departed this life January 17, 2022 at the wonderful age of 94 years. He was the youngest of eight children born to Eldridge Sr. and Nancy Kimble Allen on July 28, 1927 in Grant Parish, Louisiana. He was educated... View Obituary & Service Information

The family of Eldridge Allen Jr created this Life Tributes page to make it easy to share your memories.

Send flowers to the Allen family.