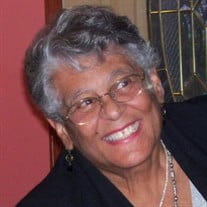 Doris Mitchell was born Doris Jean Ganges on August 17, 1930, the 6th of 8 children born to Rowland Ganges and Mamie Young Ganges. She passed from this life peacefully in her sleep at the Riderwood Senior Community in Silver Spring, MD on July 11, 2021. Doris was born in Baltimore and grew up as a young child in Philadelphia. Her mother died when she was 5 years old and she was adopted by her Uncle Herman Ganges and Aunt Melba Ganges of West Chester, PA, where she lived throughout her teenage years. Doris was known for her athleticism and love of the outdoors. She was an exceptional field hockey player and an avid member of the Girl Scouts of America, which she participated in through her high school and college years. In 1952, Doris graduated from West Chester State University Teachers College and moved to Boston to become the District Director of the Boston and Newton Girl Scouts Council. Soon after she arrived in Boston, she met her husband-to-be Joseph S. Mitchell Jr., a newly admitted attorney and army veteran. On December 26,1953, they married and began a partnership that would span more than fifty years. They had three children, Joseph III, Michael and Marcene. The family moved to Newton where Doris raised the kids before returning to work. From 1969-1974, Doris held various positions at Radcliffe College (now Harvard University), rising from Assistant Director of Admissions to Assistant Dean of the College. While working at Radcliffe she spearheaded the historic conference “Black Women: Myth and Realities” and earned a certificate in Higher Education Administration from the Harvard University Graduate School of Business Administration. She was honored for her work by the Harvard Black Alumni in 2006. In 1974, Doris left Radcliffe to become the Director of Personnel for Abt Associates, a consulting firm with several hundred employees. She worked at Abt for 10 years, eventually becoming Vice President of Administration and Personnel. In 1984, Doris left Abt and became Corporate EEO Manager for Digital Equipment Corporation in Concord, Mass. She worked at Digital until 1992, rising to the position of US Affirmative Action Implementation Manager before she retired. Doris maintained a very active social life and presence as a community volunteer. She was a member of the Links and the Circle-Lets, and was co-founder of the non-profit Blacks Helping Blacks, Area Chairwoman for the United Fund, Regional Coordinator for the United Negro College Fund Drive and Board Member of many non-profit organizations including Freedom House, American Museum of African American History and the Ruggles Street Nursery School. Throughout her married life, Doris and her family were part of the community on Martha’s Vineyard Island where they spent almost every summer. This love of the Vineyard was passed down to her children and grandchildren who still retain the family home on the Island. Doris also passed on her love of sports. She was an avid tennis player helping the Mitchell family win many of the famed Oak Bluffs tennis tournaments and supporting their lifelong involvement in the sport. In retirement, Doris and Joe moved to Sarasota Florida where they lived for nearly thirty years and were active members of the community. Doris entertained, golfed, became an accomplished bridge player, was a supporter of the West Coast Black Theatre Troupe, and a dedicated volunteer and “Friend of the Betty Johnson North Sarasota Public Library.” Doris was preceded in death by her husband Joseph S. Mitchell Jr., and leaves behind her three children, Joseph S. Mitchell III, Esq., Michael David Mitchell, Esq. and Marcene Diane Mitchell; her grandchildren, Thomas Delano Broadwater III, Mitchell Ganges Broadwater, Maya Michelle Broadwater and Erica Jones; daughter-in-law, Carolyn Mitchell; her sister, Annette Stradford; and a host of nieces, nephews and extended Mitchell, Holland, Ganges, Stradford, Miller and Broadwater family.

Doris Mitchell was born Doris Jean Ganges on August 17, 1930, the 6th of 8 children born to Rowland Ganges and Mamie Young Ganges. She passed from this life peacefully in her sleep at the Riderwood Senior Community in Silver Spring, MD on July... View Obituary & Service Information

The family of Doris J. Mitchell created this Life Tributes page to make it easy to share your memories.

Send flowers to the Mitchell family.