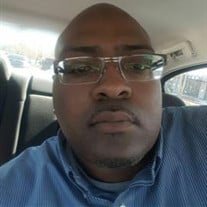 Darrell Keith Wallace (known as “Big Wall” to his close friends) was lent to us for only a little while, but God, in his infinite wisdom, called him home on Sunday, September 19, 2021 after a short stay at the University of Maryland Capital Region Medical Center in Largo, Maryland. Keith was born to Mr. Jimmie E. Wallace, Jr. and Ms. Carole Cabble Wallace on February 28, 1972 in Washington, DC. During his lifetime, he resided in Lynchburg, Virginia for several years, Forestville, Maryland, and Atlanta, Georgia. Keith attended Forestville High School and later Howard University, where he was a member of the Howard Bison football. He loved football, but also loved people; he loved to laugh and to make others laugh. Keith accepted Christ as his Savior at an early age, and truly loved the Lord as evidenced in his later writings and loved to post his own personal testimonies of the goodness of God on his Facebook page. He spent many years employed as a private security contractor in the DC area before moving to Atlanta, GA. There he performed private security work for several well-known celebrities and was blessed to travel all over the United States and to several foreign countries. Ultimately, Keith returned to work in Maryland but unfortunately was struck by illness. In addition to his parents, Keith leaves to cherish his memory one daughter, Janae Dibble (Juwan) and a granddaughter, Juleeah Dibble, of Farmville, VA; a brother, Eric Brown of Atlanta, GA; two paternal great-aunts, Bonnie Threatt of Sylacauga, AL and Maple Wallace of Harpersville, AL; one paternal great uncle, Rev. Charles Wallace (Doris) of Cincinnati, Ohio; five maternal aunts, Anne Cabble of Willingboro, NJ; Gloria Preston (Donald) of Lynchburg, VA; Beverly Logan (Von), of Atlanta, GA; Janice Harrison of Forestville, MD; and Audrey Owens of Upper Marlboro, MD; “special aunties” Carolyn Hawkins of District Heights, MD and Jean Moses of Washington, DC, “special brother” Sean Epps, Upper Marlboro, as well as a host of cousins, other relatives and friends.

Darrell Keith Wallace (known as &#8220;Big Wall&#8221; to his close friends) was lent to us for only a little while, but God, in his infinite wisdom, called him home on Sunday, September 19, 2021 after a short stay at the University of Maryland... View Obituary & Service Information

The family of Darrell Keith Wallace created this Life Tributes page to make it easy to share your memories.

Send flowers to the Wallace family.