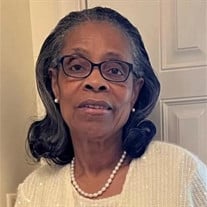 Cloretta Grice, born on February 25, 1951 to the late Clotee and Norman Agee. She was the second oldest of nine children. She graduated from Cedar Grove Academy in Mobile, Alabama and later attended Mobile Bible College. After marrying her first husband, she relocated to Washington, DC early in her life with her two sons Timothy and Marcus. Early on, her love for the Lord was evident in everything that she endeavored. She worked as a waitress, secretary and other odd fjobs to provide for her family but nothing shined quite as bright as the work she did for God. Upon moving to Washington, Cloretta and her children attended Kirkland Memorial COGIC where she diligently served under the leadership of Superintendent Isaac Sams. There she worked in many capacities ultimately to become a full time, Evangelist. Supervisor Cloretta Grice, affectionately referred to as Mother Grice, is nationally known in the Church of God in Christ for her commitment to prayer. She has served in the Church of God in Christ on local, state and national levels in various positions for over 40 years. Some of the positions include the President of the District of Columbia Jurisdictional Prayer Warriors, evangelist, church mother, teacher, and pastor. In 2010, Cloretta was elevated to the role of Jurisdictional Supervisor of Delaware. At the time of her death was a “Supervisor Without Charge” and continued to hold weekly prayer meetings with the women in the Fellowship Group in the Delaware Jurisdiction. She also was serving as the Jurisdictional Advisor to the Women’s Department in the Maryland Central Ecclesiastical Jurisdiction under the leadership of Mother Diana Banks and Bishop Carl Anthony Pierce, Prelate. In ministry, God inspired Mother to launch several initiatives. Among them have been the creation of a bimonthly evangelical televised program on WJLA TV, where she delivered the gospel message to television audiences in Pennsylvania and the surrounding areas. In 1993, Cloretta was introduced to Pastor Carl Grice by Elder Leander Coles and things seemed to be in divine order. She had found the partner that God designed uniquely for her. They were married in Holy Matrimony on September 7, 1993. As one, they traveled the world working in the ministry. In 2002 they relocated to Greencastle, PA where they had their first Prayer Conference and later founded Praying Time Ministries COGIC. As co-founders of the ministry, she and her late husband, Pastor Carl Grice, were blessed to spread the Word of God through revivals, seminars, shut-ins and prayer conferences. Cloretta leaves to cherish her memory her two sons Timothy (Euronda Travis ), Marcus (Vera Travis ) and one step daughter Janice Brunson ( Leo Brunson) five sisters Sue Ellen Bolden ( George Bolden ), Augustine Agee, Mattie Lewis, Denise Perryman, Mary Dorsey, three brothers Norman Agee, Jr, (Bobbie Agee), Gregory Agee and Johnnie Agee, eight grandchildren Lashonda Bryant (Jared Bryant), Janine Brunson- Johnson (Kenneth Johnson), Tyreq Travis, Ne-Ko Travis, Camryn Hanna and Kendall Sims, Nzinja Sokoni, Brittney Dove, eight great grandchildren Zion Travis, Khloie Poindexter, Raheem Bryant, Xyon Travis, Xavier Travis, Reign Sokoni, Peyton Murdock, Aniah Tiggle and a host of nieces, nephews,cousins, friends and extended family to include her cherished Praying Time Ministries family

Cloretta Grice, born on February 25, 1951 to the late Clotee and Norman Agee. She was the second oldest of nine children. She graduated from Cedar Grove Academy in Mobile, Alabama and later attended Mobile Bible College. After marrying her... View Obituary & Service Information

The family of Cloretta Grice created this Life Tributes page to make it easy to share your memories.

Send flowers to the Grice family.