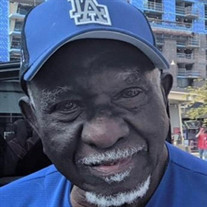 Hello Family and Friends If you are reading this it means the good LORD has called me up to the plate for my last pitch, and I have hit a grand slam on up into the upper room. I have taken care of all my funeral arrangements before my death to take stress off my daughters Darnella and Jackie. This includes writing my own obituary because I wanted to tell you all about my life my way. If someone does not like the way things are done, all I can say is I am sorry. Things are being done as I asked and trusted them to do. I am Charles Monroe Murrell Sr. I was born on March 12, 1926, in Praco, Alabama to my late parents Prince Murrell and Frankie Mae Murrell. I have family that has gone on before me: Vera E. Murrell (wife), Alexander Murrell (son), Troy K.P. Cummings III (great grandson), Elvin Marsh (sister), Lawrence Jackson (brother), William E Morton (brother), Gladys Whatley (sister), Dana Whatley (nephew) I leave family behind not to be sad but to be happy enjoying the memories: 1 brother Prince Lewis Murrell (JoAnn) Peeksill, N.Y. 2 daughters Jackie McMickens (Fairfield, Ala.), Darnella R. Flowers (Waldorf, Md.) 1 son Charles M. Murrell Jr. (Woodbridge, Va.) grandchildren: Charles M. Murrell III (Boston, Ma), Naomi M. Murrell (Dale City, Va.), Alexis Murrell (Baltimore, Md.), Deshalyn E. Burrus (Waldorf, Md.), David L. Burrus (Dale City, Va.), Roderick McMickens (Birmingham, Ala.), Shelika McMickens (Birmingham, Ala.), Desmond McMickens (Nashville, Tann.), Tchernavina Reese (Atlanta, GA.), Shannon Murrell Hall (Stone Mountain, GA), Travon I. Jackson (New Britain, CT.), Travis T. Murrell (Woodstock, GA.), and a host of great grandchildren; great great grandchildren; nieces; great nieces; nephews; great nephews; and other relatives and friends. I was a 17 year old senior at Westfield High School in Westfield, Alabama when I was drafted into the military. My parents had to write a letter to the draft board and beg them to let me finish my last year in school before sending me off to the war and they did. As soon as I graduated, I was shipped off to boot camp. The military was very hard during that time because it was segregated. The black soldiers were treated very different than the white soldiers, we were given their hand me downs. Different barracks, mess halls, transportation, and even medical care. It was so bad that one time me and a fellow soldier rode in the bathroom on the train from up state New York all the way to California in the bathroom because we could not ride in the car with the white soldiers and there was no more room in the ‘Negro Car.’ We could not wait for the next train because we would have been late reporting for our new duty station. I served my country in World War II, the Korean War and Vietnam. It was very hard, but it got a little easier as time went on and I retired after 27 years, 9 months and 8 days later at Fort Eustis, Virginia with a Honorable discharge. Several years later Jan. 16, 1999, me and some good friends: Miss Jane Banks and Mr. Dillard formed the Ft. Eustis & Ft. Story Retirees Club. I was the organization’s 1st Business Manager and I held that title for many years. I later moved from Va. Beach, Va. to Dale City, Va. and I formed another social club called the Enlighteners where I held the position as Business Manager/Treasurer. After retiring from the military, I went back to work as a Correctional Officer at Lorton Reformatory Prison which is now torn down. I met a lot of good friends there and I am still friends with some of them today. After Lorton I went back into the government under Civil Service and worker at Fort Belvoir as the foreman over the Motor pool. I retired a 2nd time and shortly after Vera and I moved to Dover, DE. where we lived for 29 years until her death in August 2017. I started working again for driving the bus for the school system and I had to get up at 5:30am. That job did not last too long because I wanted to stay up late to watch my Dodgers and that caused me to be drowsy in the mornings, so I gave the lady the keys back one morning and told her I was done. After Vera died, I moved to Waldorf, Md. to live with my daughter Darnella and her husband James, where I’m sure she has taken care of me until the end. Family please do not cry and be sad that I am gone. I have lived a great life and have no regrets. I do not know how old I will be when you read this, but I have already lived to see 93 and in 1 month if I make it, I will be 94! I have been all over the world, was able to buy and go do anything that I wanted to do! I have been to an NBA final, a Super Bowl and a World Series. I have looked death in the face twice where I should have been dead, and I lived this long. I know I am truly Blessed by the LORD! If you want to do something for me, please keep the family reunions going, if not every year, then please every other year! Its important that we get together to enjoy one another with love. I got a lot of miles on these old legs and it is time to rest them. I LOVE ALL OF YOU!

Hello Family and Friends If you are reading this it means the good LORD has called me up to the plate for my last pitch, and I have hit a grand slam on up into the upper room. I have taken care of all my funeral arrangements before my death... View Obituary & Service Information

The family of Charles M. Murrell, Sr. created this Life Tributes page to make it easy to share your memories.

Hello Family and Friends
If you are reading this it means the...